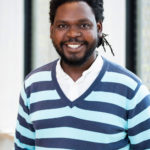 Boaventura Monjane holds a Ph.D. in Postcolonialisms and Global Citizenship (Sociology), from the CES/Faculty of Economics, University of Coimbra. He is based at the Institute for Poverty, Land and Agrarian Studies (PLAAS, UWC) as a postdoctoral researcher and is also a fellow of the International Research Group on Authoritarianism and Counter-Strategies of the Rosa Luxemburg-Stiftung. In addition, he is an associate fellow at the Centre for African Studies (CEA, UEM).

Boaventura's areas of interest and research include agrarian movements, rural politics, food sovereignty, and climate change. He has been involved in agrarian social movements, both locally and internationally, working with the National Farmer’s Union of Mozambique (UNAC) and the International Secretariat of La Via Campesina. He was also involved in the production of professional film documentaries (Land of Plenty, Land but of a Few and TIERRA EN SUSPENSO: Amenazas y resistencias en Cabo Delgado) on the topics of his interest.