There are a number of public and private areas in the municipality of São Paulo, which are abandoned or under-utilized and could be used for planting urban community gardens. However, for many different reasons, measures of this nature do not always occur. Most of the time, the establishment of a community garden requires collective efforts - from the community, associations, non-governmental organizations, and the government - not only for finding suitable land for the implementation of community garden projects but also to make management feasible, adequate, and communal/collective. 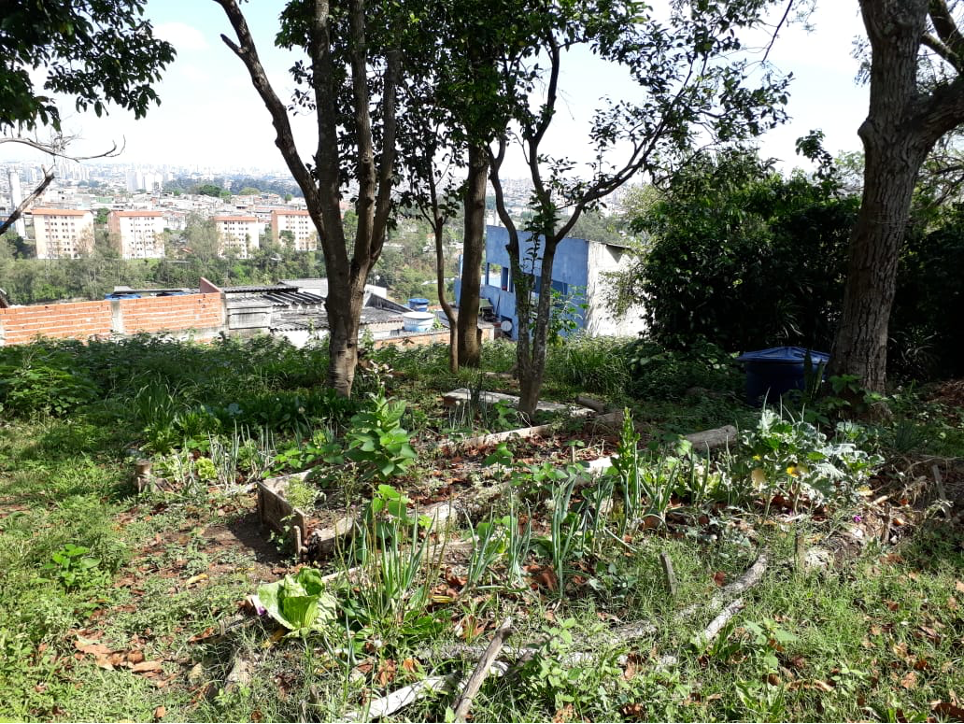 With regard to access to land for the establishment of vegetable gardens in the municipality of São Paulo, in her doctoral research (under the supervision of Prof. Marcos Sorrentino at the University of São Paulo), Katia identified that the absence of land for housing is one of the main obstacles to food production in the city. The absence of a public housing policy implies the disorderly occupation of idle land in the city, making it impossible for the Government to grant land to farmers. In addition, what ends up remaining for agriculture are areas that over the years have been transformed into garbage dumps, are places strewn with rubble, and even places of drug consumption, which requires effective government measures.

In the governmental sphere, from the 2000s onwards, several programs were created with the purpose of encouraging urban agriculture in the municipality of São Paulo. However, Katia found that low financial resources, the low number of technical professionals, the absence of work equipment, and the lack of political interest, caused the complete discontinuity of some public programs.

The lack of political interest is one of the obstacles to the establishment of community gardens and, consequently, to the communal management of space, since the absence of environmentally adequate land implies the need for partnerships with public utility companies, such as ENEL, SABESB, ELETROPAULO, which do not always occur due to party differences. Once the partnership is established, each of these companies has a different way of relating to farmers and of communal management of the area and the elements of nature that exist in it, especially in relation to the way of production, distribution, and consumption of food.

Each of these governance models has its strengths and weaknesses, and the interviews conducted indicate that collective management seems to be the biggest challenge faced. In order to avoid governance conflicts, either between farmers themselves or between farmers and public service providers that grant areas for community agriculture, documents are prepared to provide for the rights and duties of each party. In other cases, however, the company prefers to partner with an NGO so that it can determine how the area should be managed, often disregarding the interests of the farmers themselves.

In the case of SABESP, the Internal Regulation is the first step to establish rules of coexistence between farmers, and the company recommends, whenever necessary, that the document be revised to change, include or exclude new rules more consistent with the experience that the group acquires over the years. In the case, for example, of the community garden located in the Vila Nova Esperança neighborhood, far west of the Municipality of São Paulo, the collaborative work started with the cleaning of the land that was becoming a place with excessive garbage. Subsequently, farmers created rules of coexistence, including the institution of a social currency that distinguishes those who work and those who do not work in the garden. In this garden, the production in the flowerbeds and the commercialization is done collectively.

With regard to the low number of professionals working in the governmental sphere, what Katia noticed was the transfer of governmental actions to NGOs financed by the Special Environment Fund (FEMA). These NGOs, in turn, promote several actions together with farmers in an attempt to improve the production, marketing, and local consumption of food. However, attempts to bring the municipal government and the Third Sector closer together confirm what has been exposed in the international literature that this new Public Sector governance model promotes the reduction of State actions by transferring the provision of public services to the Third Sector.

The gaps left by the municipal government, especially with regard to the creation of new gardens, as well as technical assistance to producers in the municipality of São Paulo, was not filled in a constant and equal way throughout the territory by the Third Sector, due to the fact that there is no constant funding for these actions. The lack of quality service provision generates, as a consequence, the discouragement of agricultural activity, which, in turn, is already marginalized in large cities.

The marginalization of agricultural production in large cities is due to health risks resulting from environmental conditions, such as water pollution and soil contamination. In this context, a portion of the population that has greater purchasing power is able to purchase healthy food produced in other locations, while the poorest remain constantly exposed to environmental risks. In addition, there is a relationship between extreme climatic events and agriculture in cities, since increased precipitation due to climatic changes in plains impermeable by concrete, generate floods that, consequently, lead to loss of soil nutrients.

On the other hand, urban agriculture can be considered a solution based on nature (SbN), since, according to Dubbeling (2014), agricultural practices in cities contribute to the drainage of rainwater in the soil, improving the microclimate of cities, reducing the temperature in built-up areas, as well as reducing the burning of fossil fuels carried out in the transport of food to urban areas, preventing also the occurrence of extreme climatic events. Urban agriculture also enables an improvement in food security, an increase in the generation of jobs and income for poor and middle-income residents, contributes to an ecologically correct urban environment, among other benefits.

In this context, in addition to contributing to the reduction of environmental vulnerability, agriculture in cities also helps in the resilience of many urban groups that are in a situation of poverty and environmental risk through the production of their own food. However, the possibility of the urban poor to become resilient and self-managing in solving their problems cannot exempt the State's responsibility in caring for the city. For this reason, agriculture cannot be seen as an end in itself, but rather as one of the many tools that, in conjunction with other themes such as housing, basic sanitation, job and income generation, among others, promote a better quality of life for municipalities. For that, society, NGOs, and Governments need to attribute new values to urban agriculture at the local, regional, and national level, incorporating it as a priority for the achievement of food sovereignty.

In order to understand the difficulties faced by a Civil Society Organization in the development of actions with farmers in São Paulo, researcher Katia Carolino started her internship at Prato Verde Sustentável/Sustainable Green Dish.

Sustainable Green Dish was founded in 2013 by WAGNER RAMALHO and currently consists of 9 members who, motivated by the need to transform the reality of the peripheries, decided to work with environmental and food education through urban gardens. 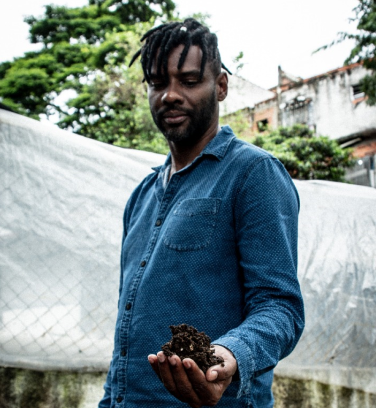 The history of the “Prato Verde Sustentável” began when the Associação Mutirão (a non-profit organization that carries out socio-educational activities with children, adolescents, young people, and adults in situations of social vulnerability) allowed the use of part of its land for the implantation of educational gardens.

Katia Carolino carried out many activities, including environmental education with children and more specifically, lessons regarding the use of rainwater and the recycling of organic waste. 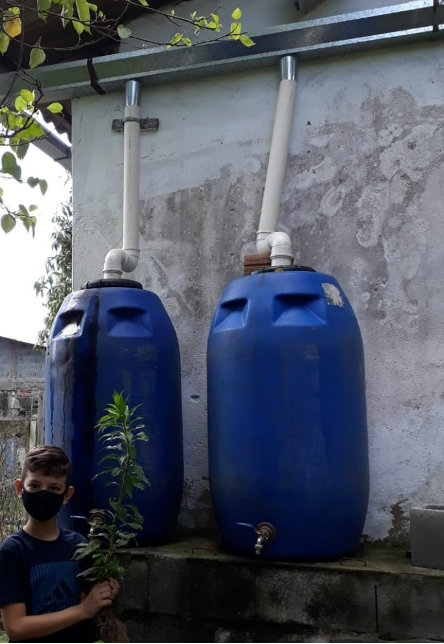 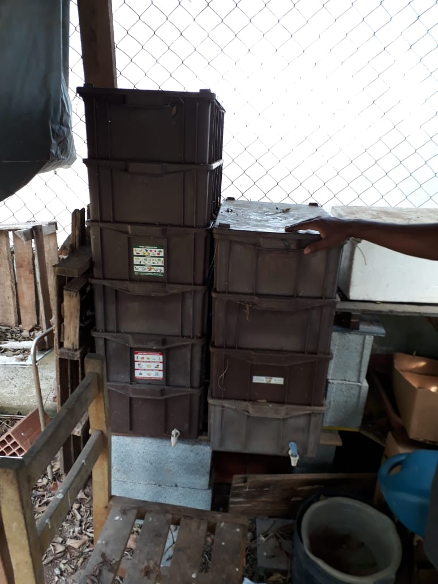 With the objective of reducing food segregation and nutritional deficit in the community, the garden currently serves 70 families, offering agro-ecological kits once a month. However, one of the objectives of the Sustainable Green Dish is to expand production to serve more families in the community, as well as to create other community gardens in other regions of the city. But in order to do this, it requires financial assistance, since the NGO survives from selling the surplus production.

During the work in the vegetable garden, the group promotes conversation circles with the objective of making the participants aware of socio-environmental problems present in the neighborhood and others experienced by the residents. Confronting racial inequalities and gender issues is one of the objectives of the Sustainable Green Dish since the team is mostly composed of women who came from the periphery and who, through example, seek to promote social transformation.

In addition, the production of the “Prato Verde Sustentável” is especially aimed at black women, who are responsible for the family's income and livelihood and who are unemployed, generating financial autonomy, increasing self-esteem, and fostering empowerment and female representation.

In addition to donations to needy families, the Sustainable Green Dish also offers a home delivery service of vegetables and fruits that are distributed weekly (organized through WhatsApp) to people in the community who can pay for food, thus generating income for other people who help the vegetable garden.

The Sustainable Green Dish also develops pedagogical actions in other institutions and in other regions of the city of São Paulo, with the objective of increasing the number of educators who work in community garden programs.

Since March 2020, due to the pandemic that exposed a large part of the population to the disease of COVID 19, especially those without access to basic sanitation and who could not maintain their physical distance, researcher Katia Carolino together with the team has been seeking solutions with the objective of improving the nutrition of people in vulnerable situations. To this end, an online store was created to raise funds and thereby contribute to the cost of production, promoting the donation of food kits and hygiene products to residents of the community. 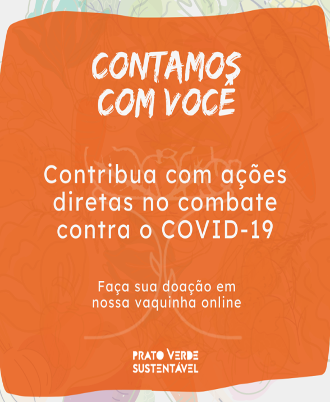 In addition to this action, in 2020, the Sustainable Green Dish was also one of 200 projects selected to participate in the Entrepreneur with Impact project, an initiative that aims to strengthen Latin American entrepreneurs that generate positive impacts for the environment, society, and the communities where they operate. And in order to obtain resources to expand the actions of the Sustainable Green Dish to other regions of the city, researcher Katia Carolino also developed project proposals in the socio-environmental area with the objective of obtaining funds from national and international financing agencies to increase the productivity of the garden and finance educational activities.