The CoAdapta | Litoral project uses citizen science to integrate local and scientific knowledge through participatory GIS in responding to climate change challenges in two Indigenous and traditional communities: the Chiloé Archipelago and interior sea in South Chile (‘comunas’ de Dalcahue and Quellón in Chiloé, Maullín in Llanquihue and Caleta El Manzano in Hualaihué) and the southeast coast of Brazil (Caraguatatuba, Ubatuba, in São Paulo and Paraty in Rio de Janeiro). 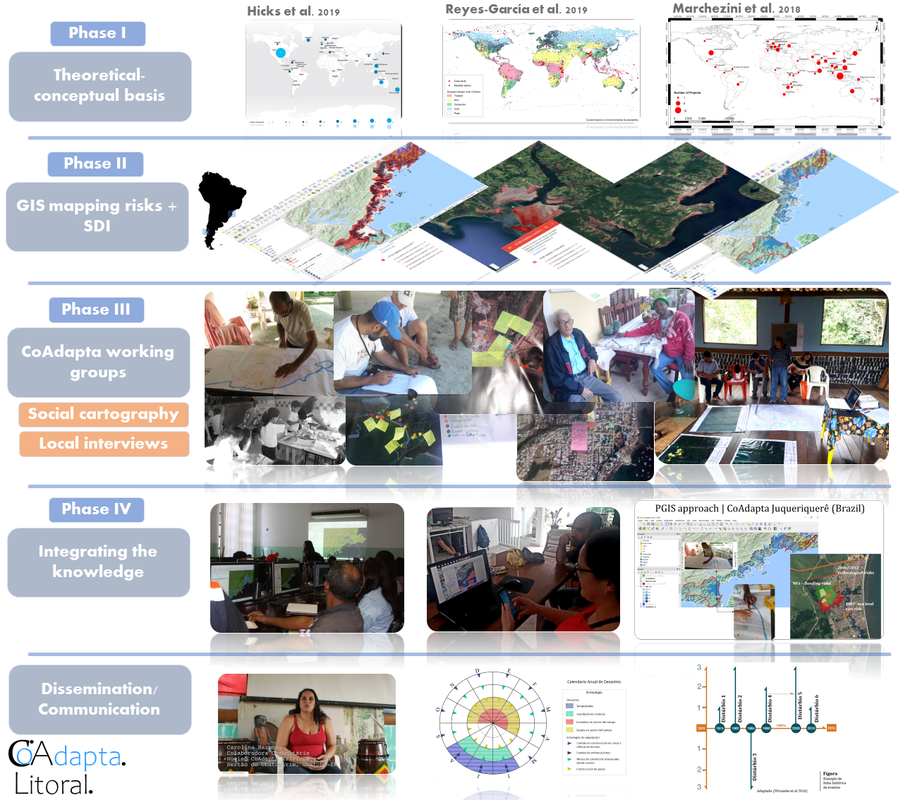 I – Step 1. Preparatory meetings to explain the research, activities, workshops for carrying out GPS collection, producing the social cartography maps, interviews with local community and considerations about the risk perception and adaptation options (e.g. observe and make note of people's perceptions of climate change, time, and how this affects their relationships). We organized 3 working groups with local peoples, that we called "CoAdapta working groups (CWG)": (1) Maullín CWG; (2) Dalcahue CWG; and (3) Quellón CWG.

The invitation for each local leader to participate in the CoAdapta project was established according to the following criteria: (I) being a native of the region; (II) exercise a leadership role in your community and support the local community, (III) in addition to having a communicator role in your community.

We held preliminary meetings and established that each community leader would be supported by a local research assistant, to help answer questions, fill out forms, and organize social cartography activities in the community.

Each research assistant, in turn, had to meet the following criteria: (I)  be a local resident; (II) and/or having previously worked in the region and with the community we were investigating. Thus, we sought to establish a bond of trust between researchers and community leaders to work in the CoAdapta project.
Thus, each CoAdapta working group was formed with at least 1 community leader and a local researcher.

(1) Maullín (Llanquihue province) - Moises Barrientos was the community researcher, in addition to being a leader of artisanal fishers in Maullín. 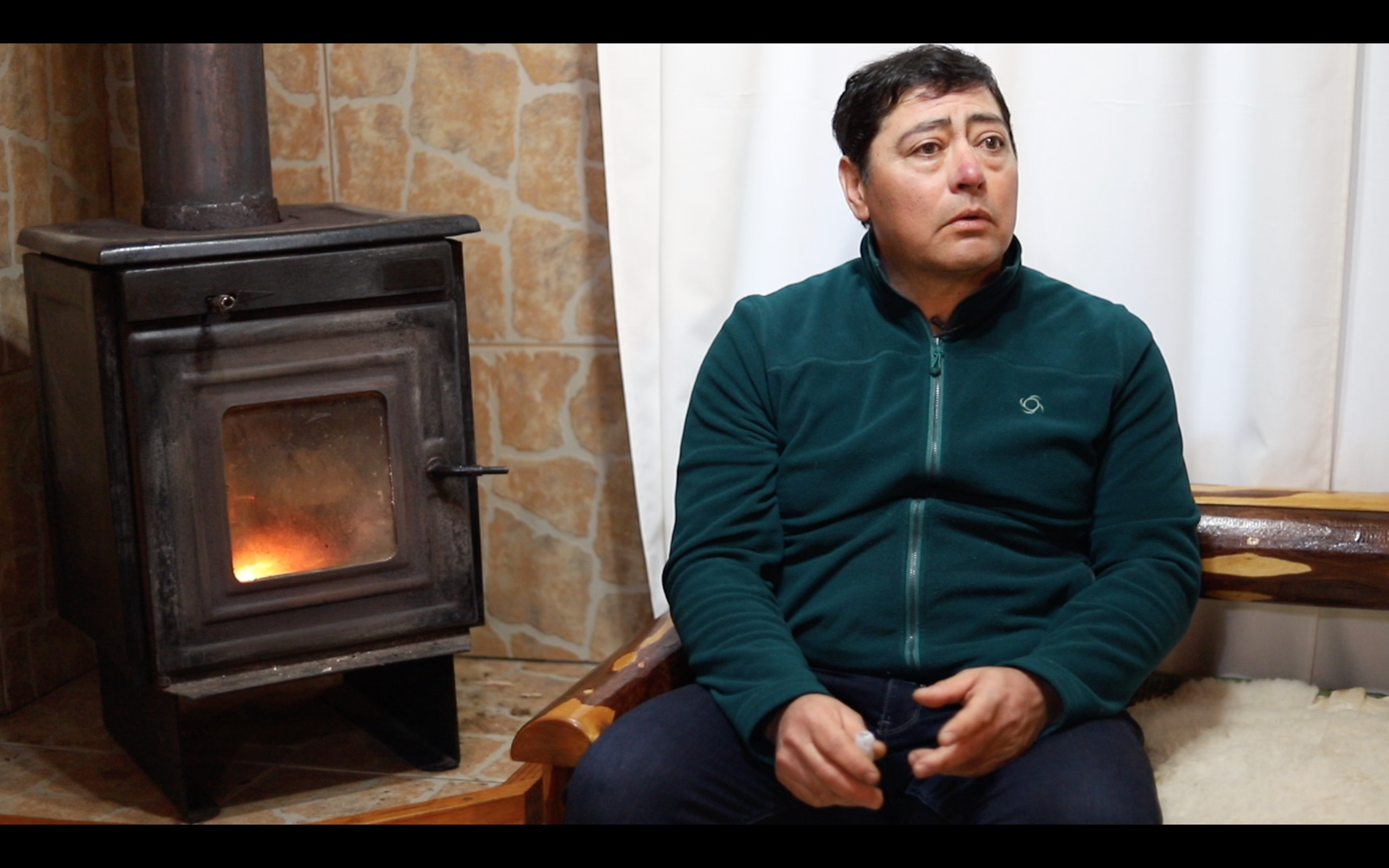 Moises had the support of anthropologist Daniela Collao (local researcher), for training to conduct interviews with older people, to do social mapping, and to support the construction of the timeline of events based on the individual perception of the interviewees.

(2) Dalcahue (Chiloé archipelago) - Carola Barría is an Artisanal Fishing manager of Dalcahue. She is also an Executive Secretariat of the Federation of Artisanal Fishers Chiloé United | Dalcahue (Chiloé) Chile. She helped us throughout the CoAdapta project with information about climate risks and disasters and impacts in her region. 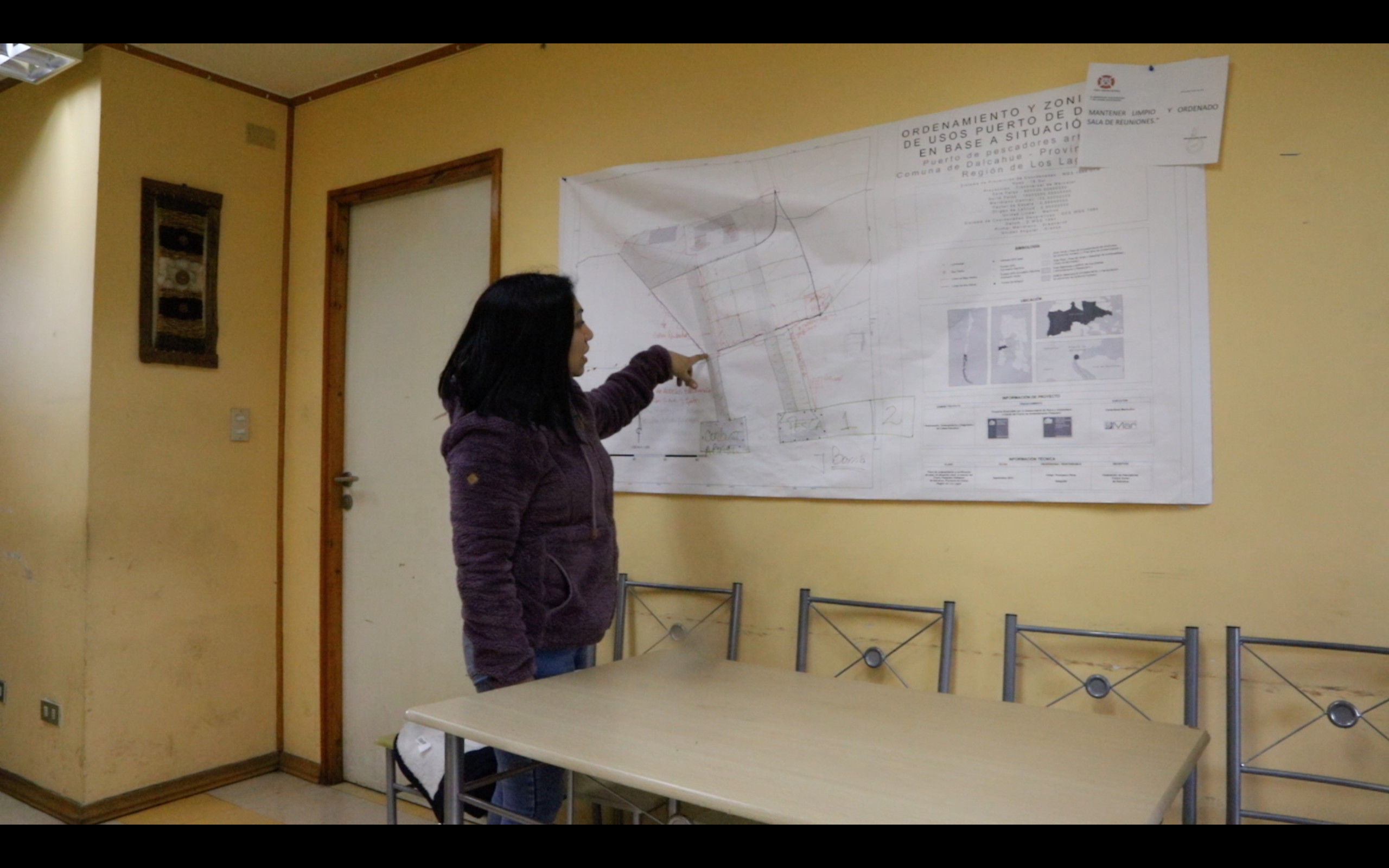 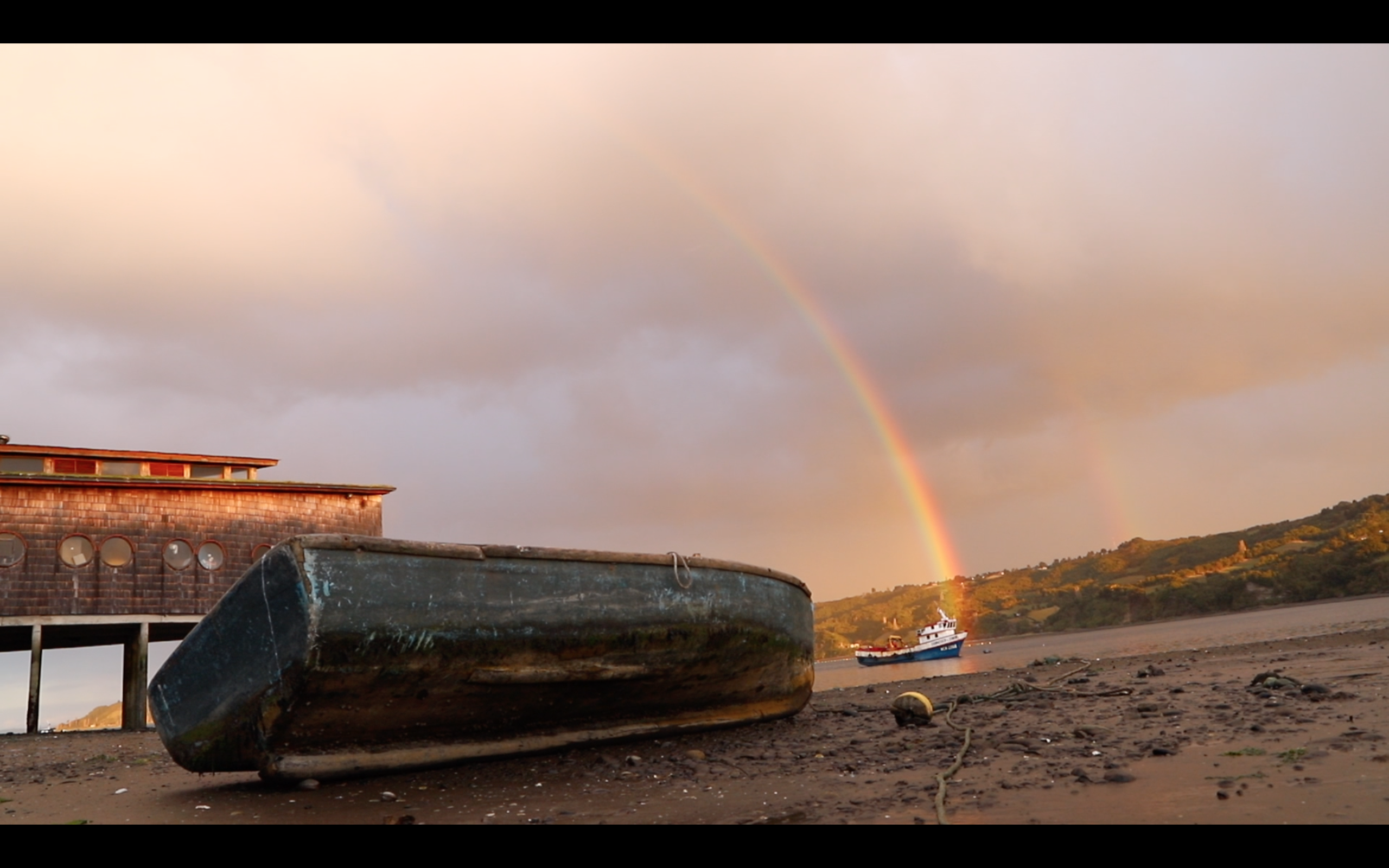 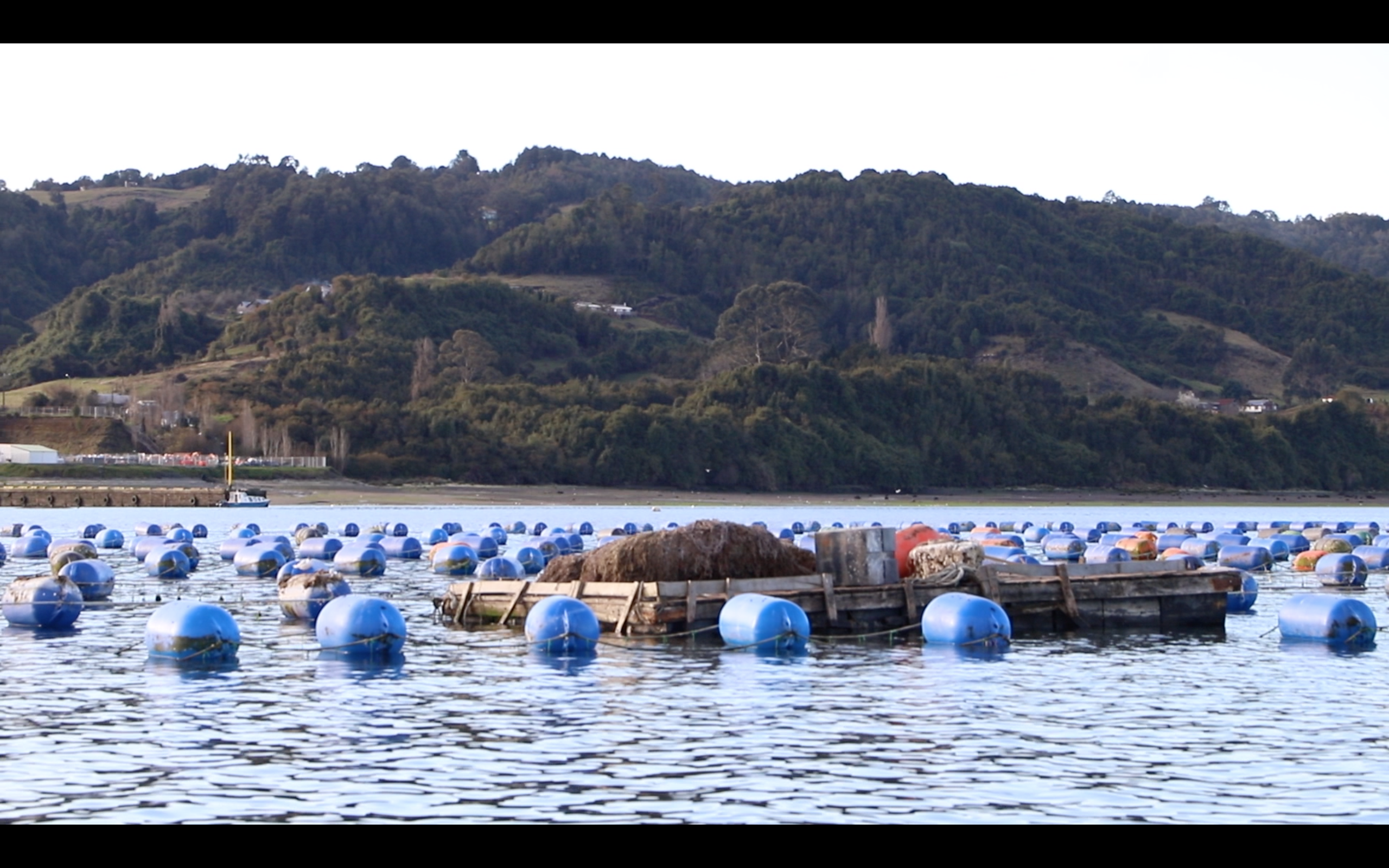 Carola referred us to Analicia Serón, daughter of an older artisanal fisherman and also a local to the region. Analicia was the community researcher and together with the geographer Francisco Brañas (the researcher assistant and local resident), realized the activities in Dalcahue. 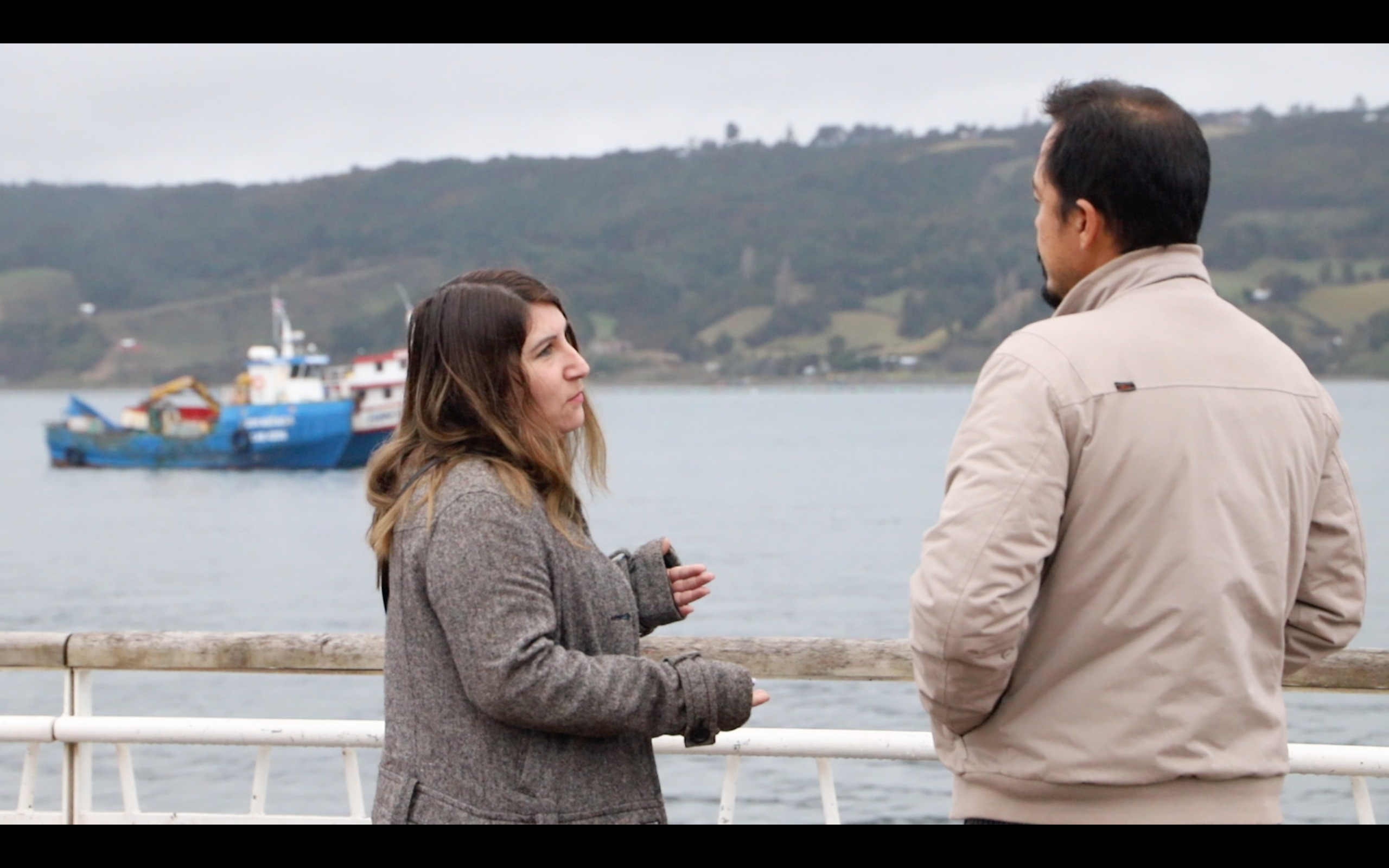 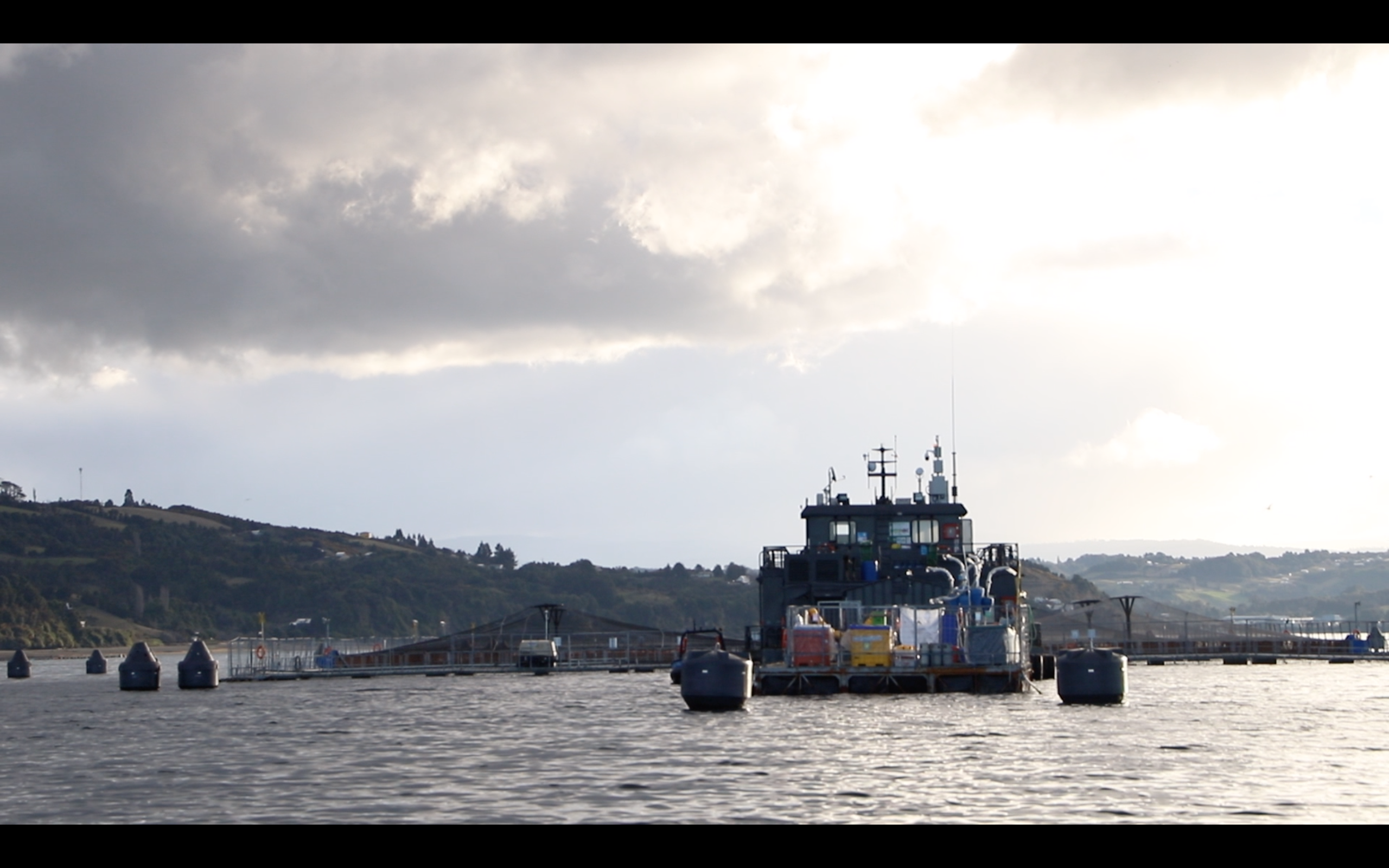 (3) Quellón (Chiloé archipelago) - the cacique "lonko" Cristian Chiguay is an indigenous leader Mapuche-Williche of Mon Fen de Yaldad community | Quellón (Chiloé) Chile. He helped us to understand his community and all the information about the Mapuche indigenous in Quellón, Chiloé. 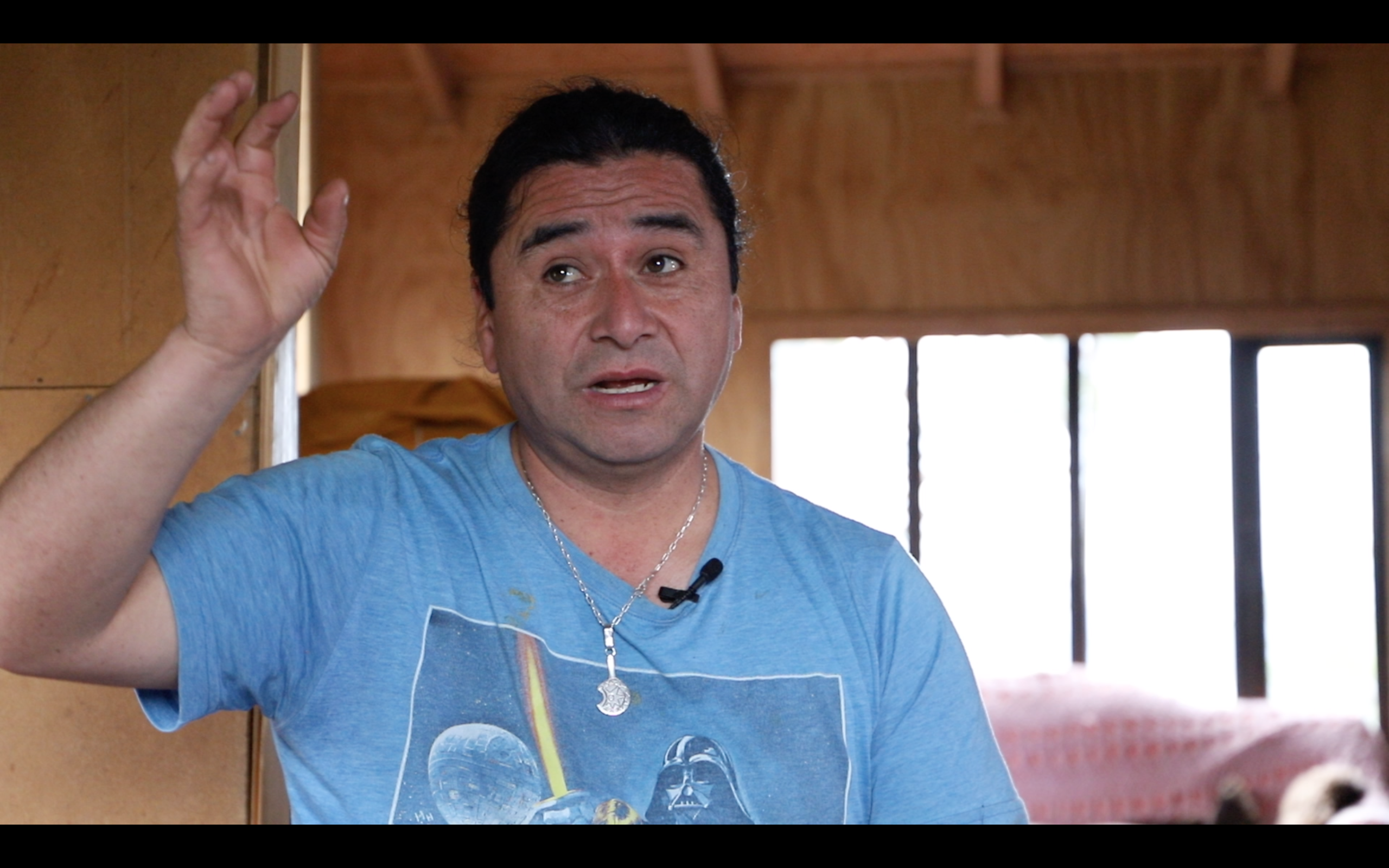 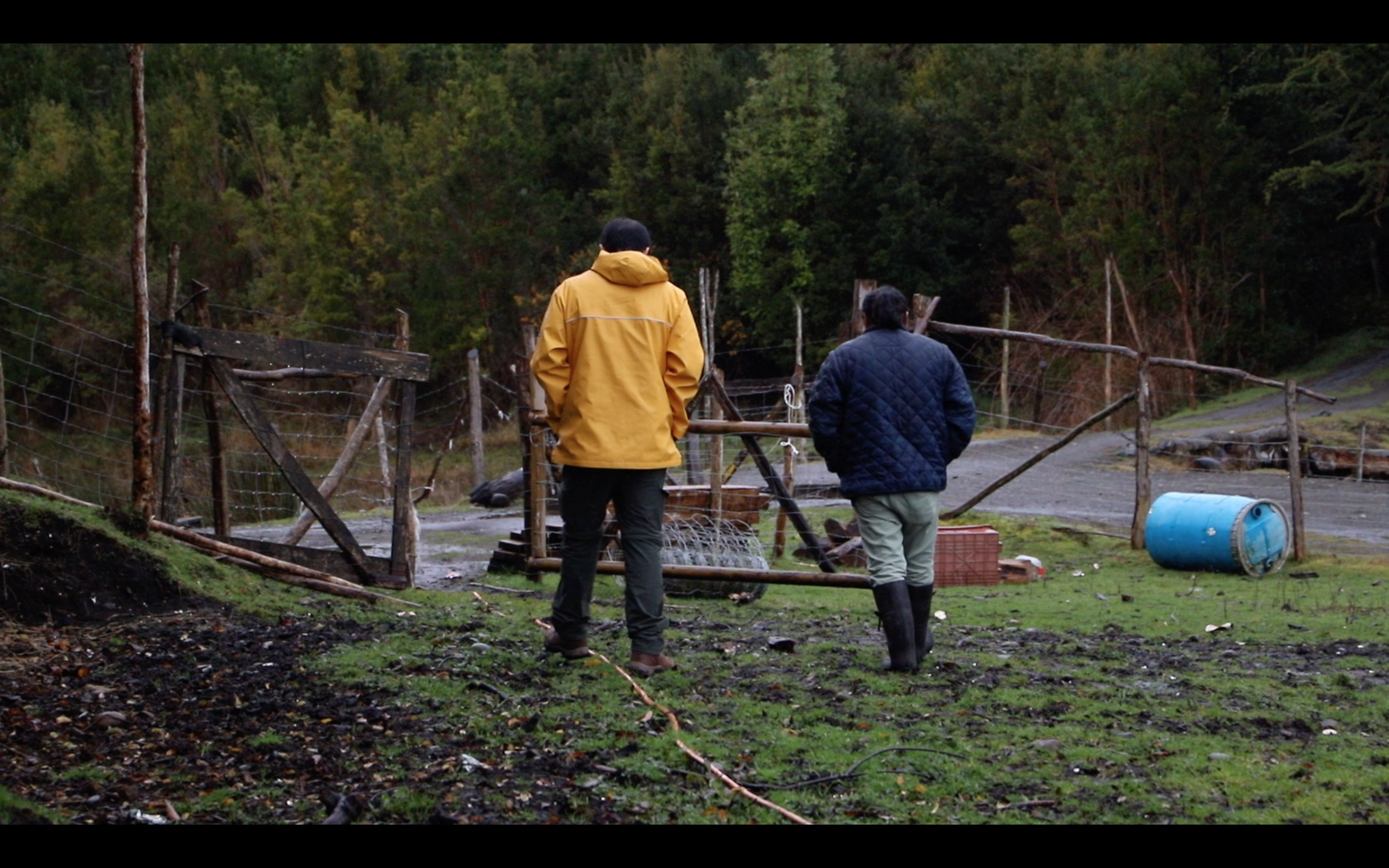 Cristian appointed his community-voice, Patricio Colivoro, to carry out the activities of the CoAdapta project in his territory. 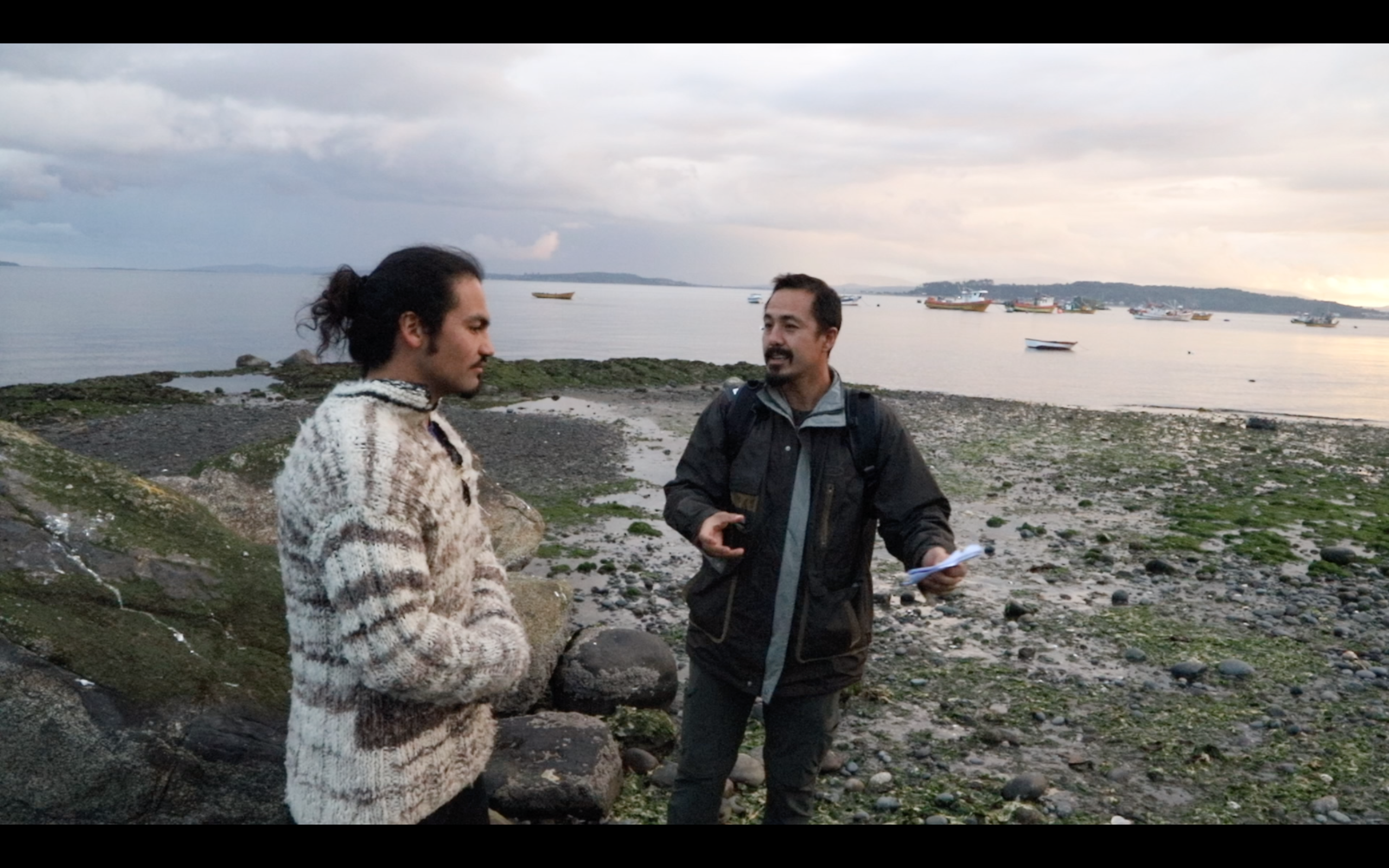 Patricio is a Werken (community-voice) Mapuche de Mon Fen de Yaldad and he was the community researcher that carried out the interviews and social cartography. 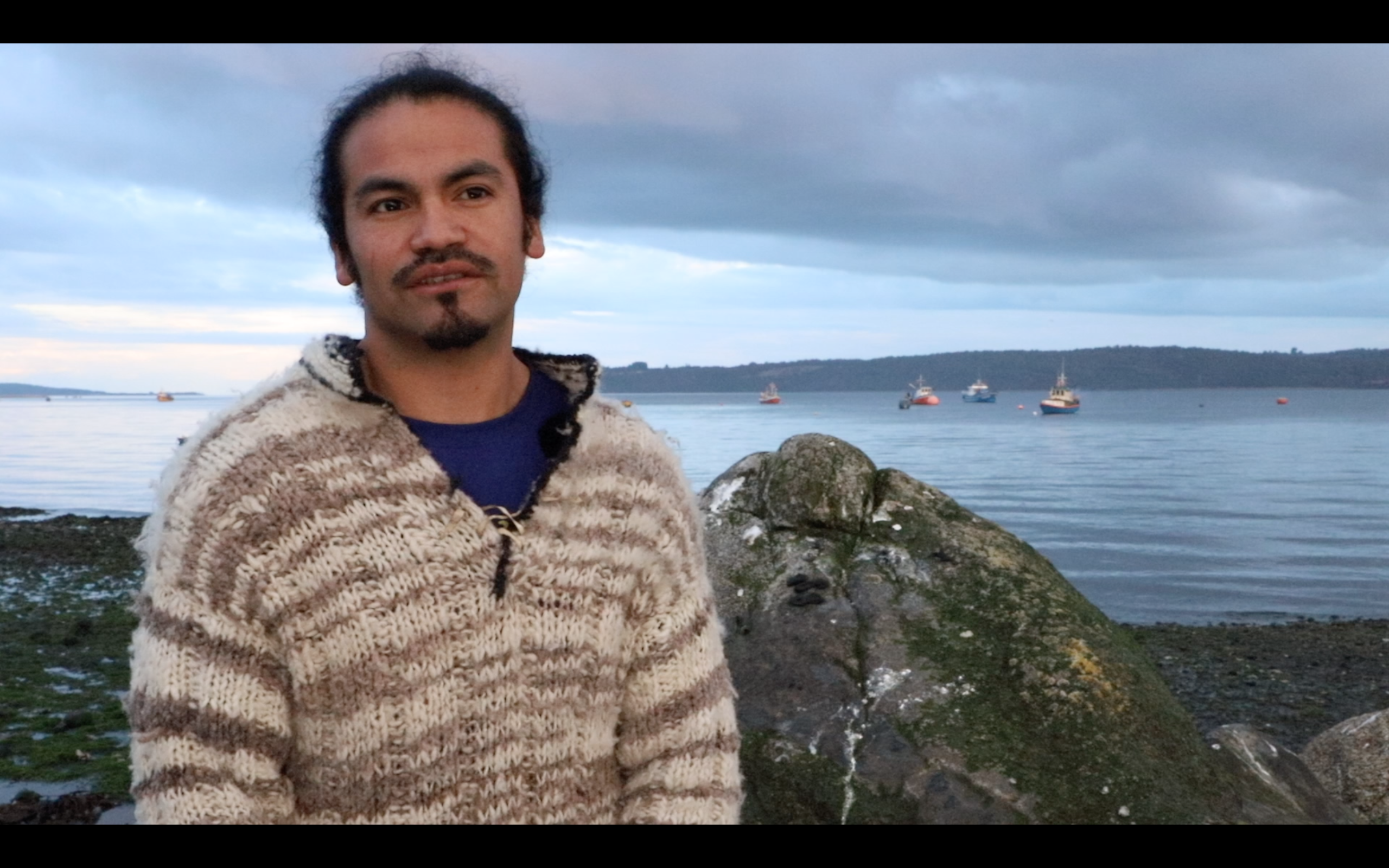 He had the support of anthropologist David Ñunez (local research assistant). 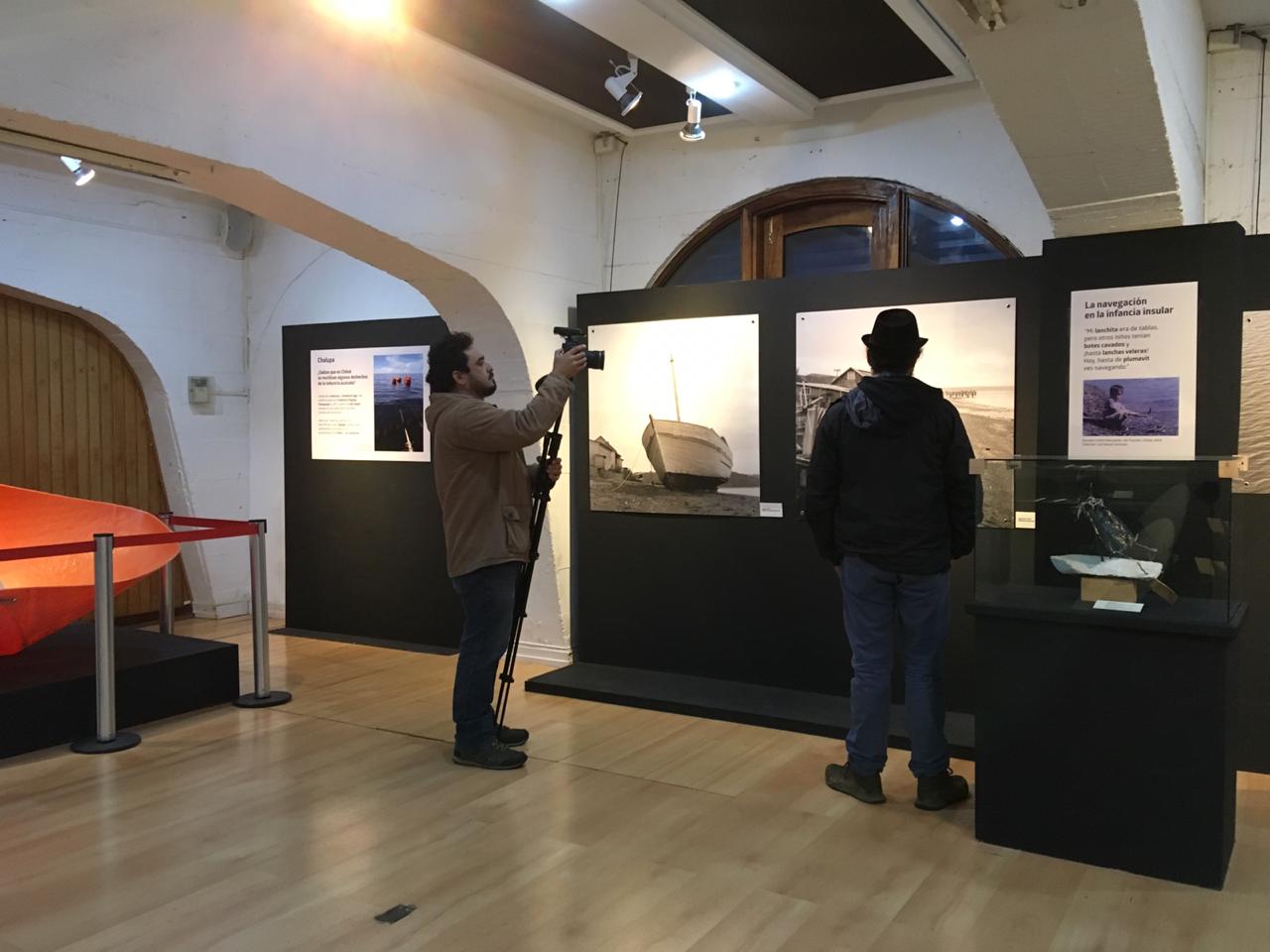 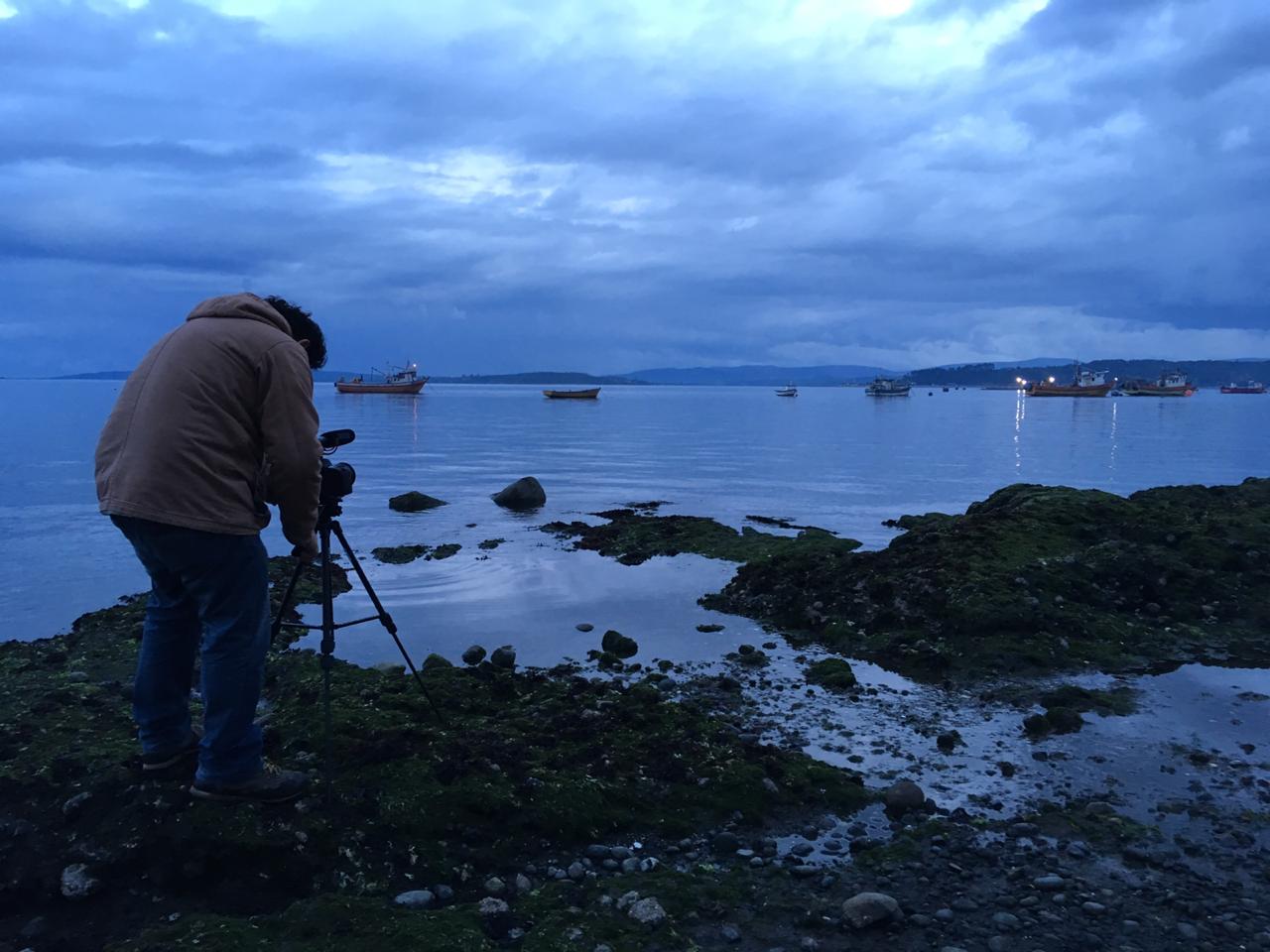 Step I activities were carried out from February to March 2019.

II - Step 2. Produce social cartography maps for risk and vulnerable areas and adaptation strategies based on local knowledge, using material provided by the research coordinator (Supporting charts, Maps in sizes A3 and A0, pencil/brush, page markers). In total, 7 support maps were produced for CoAdapta working groups to use in social cartography activities. 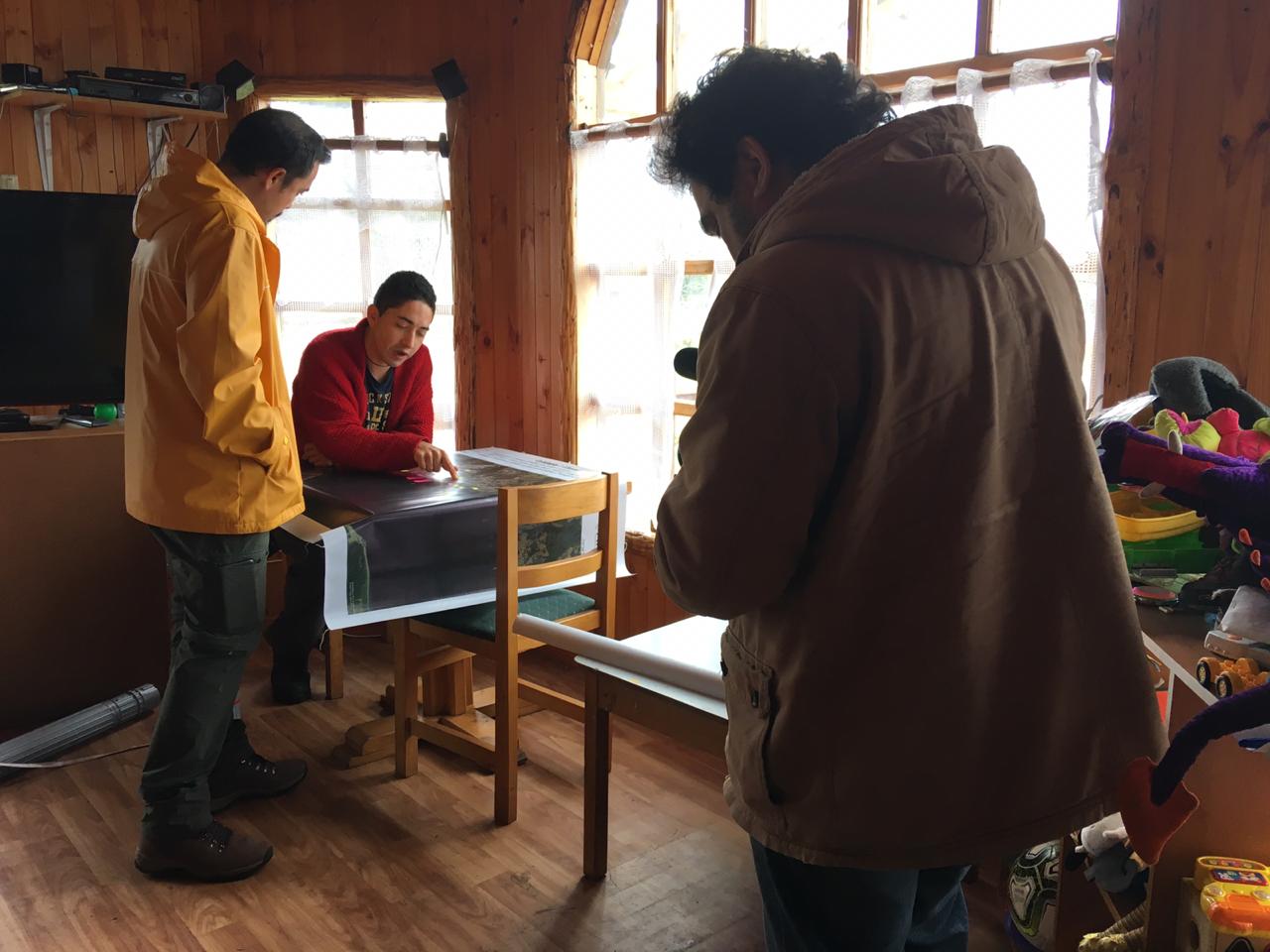 The social cartography maps were produced for the 3 study areas, which represented: (I) areas of threat to disasters such as floods, earthquakes, tsunamis, fires, landslides; (II) areas of territorial conflicts between the territories of artisanal fishing and coastal spaces for indigenous peoples threatened by the installation of the salmon industry; (III) evacuation routes, in situations of the threat of flood or tsunamis; (IV) safe areas for the population at risk. All social cartography maps were converted into digital maps to organize the CoAdapta mapping platform.

Step II activities carried out from March to April 2019.

III – Step 3. Interview key-actors, using the semi-structured questionnaire model, to identify changes in the landscape, risk areas, extreme rainfall or drought events, land use, and marine resources and disasters. The purpose of the interview is to support the mobilization of the local community in participatory activities on the identification of flood threat areas, landslides, coastal erosion, tsunamis among others. The identification of situations of social exposure and vulnerability (households near riversides, housing conditions, gender, and age of family members, people with some type of physical or mental difficulty) will also be carried out. In total, we interviewed n=74 local people in the Chile study area, were 51% men and 49% women. In Maullín were n=32 interviewed (43%), Dalcahue n=28 (38%) and Quellón n=14 (19%). In general, the results showed that 90.8% of respondents have heard about global climate change and 75% believe that changes are happening quickly, regardless of their causes being human activities or natural changes. Among the main problems highlighted by the interviewees, the impacts of earthquakes followed by tsunamis (mainly the 1960 and 2010 earthquakes), the impacts of the red tide on the production of fish and fishing resources, as well as problems such as flooding, forest fires, and droughts are highlighted. 60.5% (n = 46) are concerned with the effects of climate change, however more than half of the interviewees highlight that there are still few prevention initiatives, or when they exist, they are more associated with short-term actions (construction of retaining walls for sea storms, construction of houses using more resistant materials, etc.) than with long-term actions (education, construction in safer places, sustainable land management, etc.)
Period of step III from March 31 to 30 June 2019.

IV – Step 4. Support in the production of a timeline of disaster events, based on interviews with key actors. Disaster event timelines have been prepared from interviews and historical reports. Each study site will have a panel with a history of disaster events. Period of step IV from 1 June to 30 August 2019.

V - Step 5. Fieldwork in Chiloé and Maullín (Chile) to produce the audiovisual material for CoAdapta video, with individual interviews from participants in Chile and Brazil. The audiovisual material of the CoAdapta project contains:
1. a general video, showing the activities of the CoAdapta working groups carried out in Brazil and Chile, showing the landscapes in both places and the responses of the participants on the theme of climate change, environmental change, and adaptation strategies. It also highlights the importance of participatory research and the topic of citizen science as a strategy for community involvement and strengthening to build practical actions to provide answers to the problems experienced.

2. video capsules, showing individual interviews of each CoAdapta working group in Chile, to serve as material to leaders about their participation and project results for their community.

Step V from 10 September to 20 September 2019. The results of these videos material are in progress and will be published on the CoAdapta website - https://www.coadaptalitoral.net/ - in the second semester of 2020. 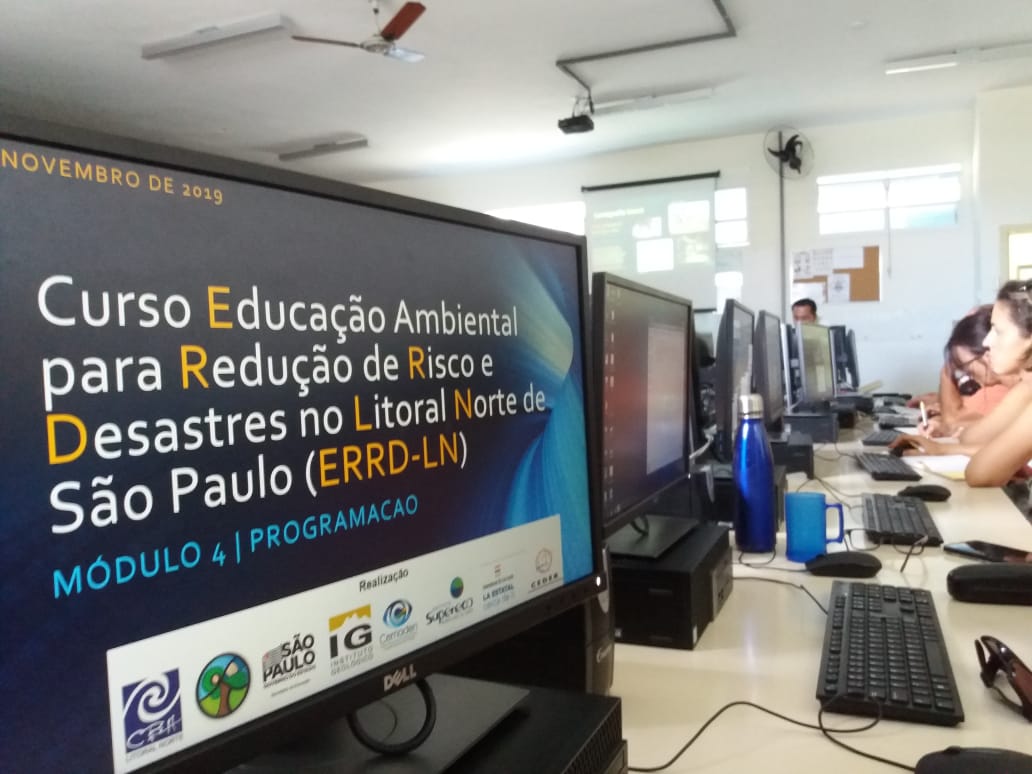 2. Couse "Education for Disaster Risk Reduction in Northern coast of Sao Paulo - Brazil". Capacity building of education professionals and others interested in disaster risk prevention on the municipalities of the Northern coast of Sao Paulo - Caraguatatuba, Ilhabela, Sao Sebastiao, and Ubatuba. The course is based on action research and citizen science, which encourages co-knowledge production, research, and local monitoring with the involvement of the community and of public institutions. Allan's module was dedicated to showing the geotechnologies (mobile app, GPS, drones) and GIS tools (Quantum GIS) and Spatial Data Infrastructure to share and upload different spatial data integrated with social cartography activities - using examples of the CoAdapta project and other empirical experiences. The target audience was high school teachers from 4 municipalities on the north coast of São Paulo and civil defense professionals. Total of 25 participants. 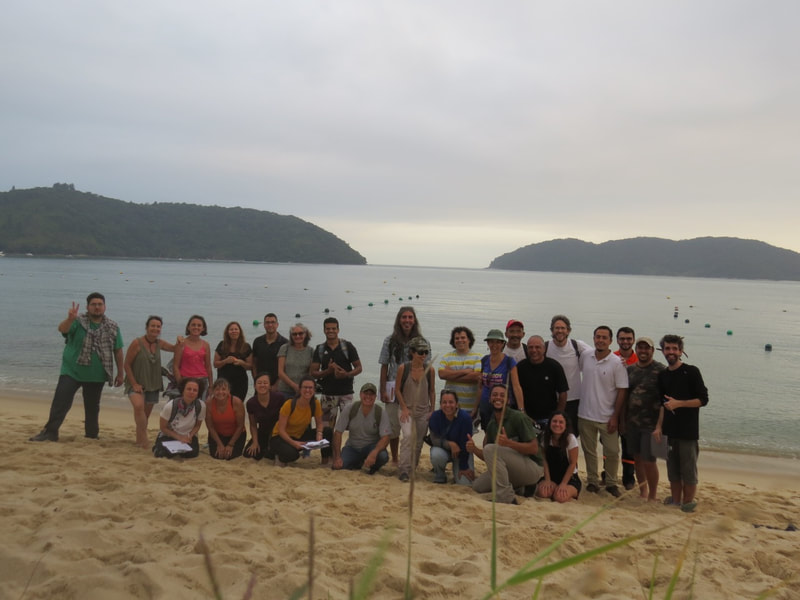 Fieldwork in Tabatinga beach to identify the coastal risks organized by Dr. Celia Regina Gouveia from the Geological Institute of Sao Paulo. Photo by: Orgs. of the Course ERRD-LN (30 Nov. 2019) 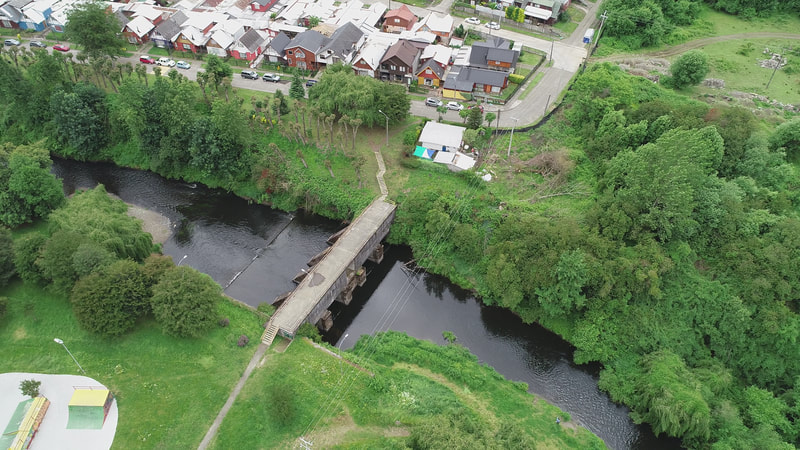 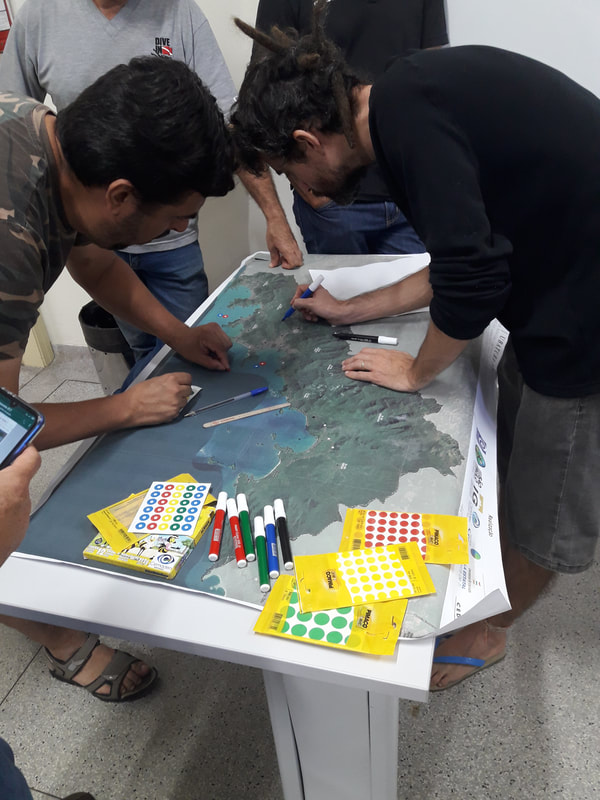 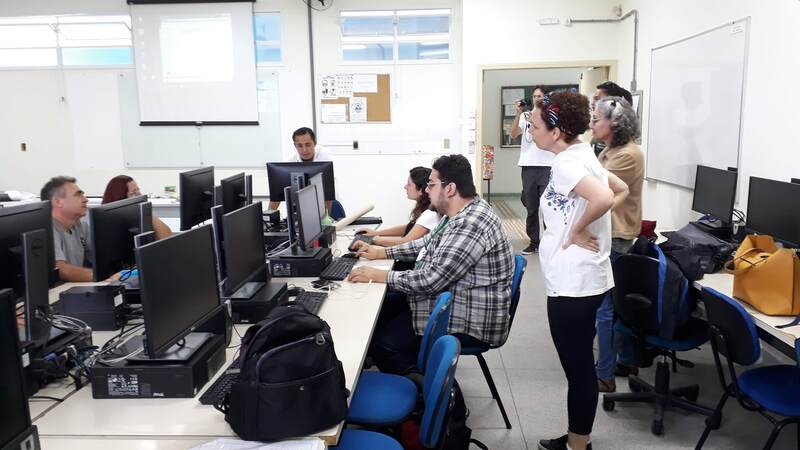 Introduction to QGIS software to organize the geodatabase. Photo by: Allan Iwama (30 Nov. 2019) 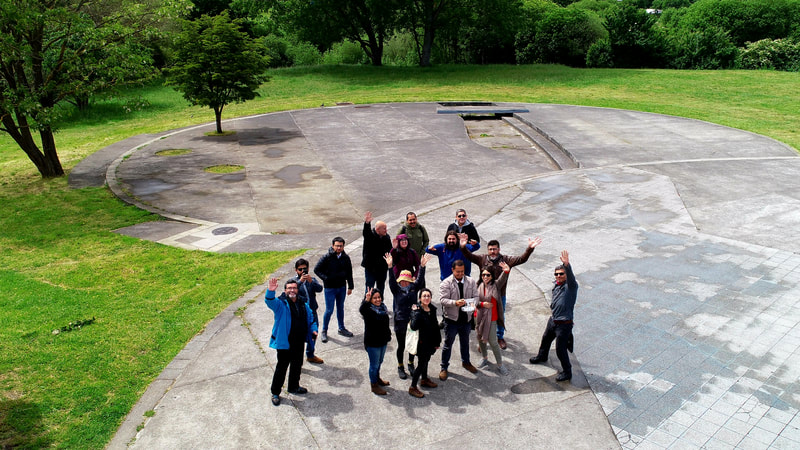 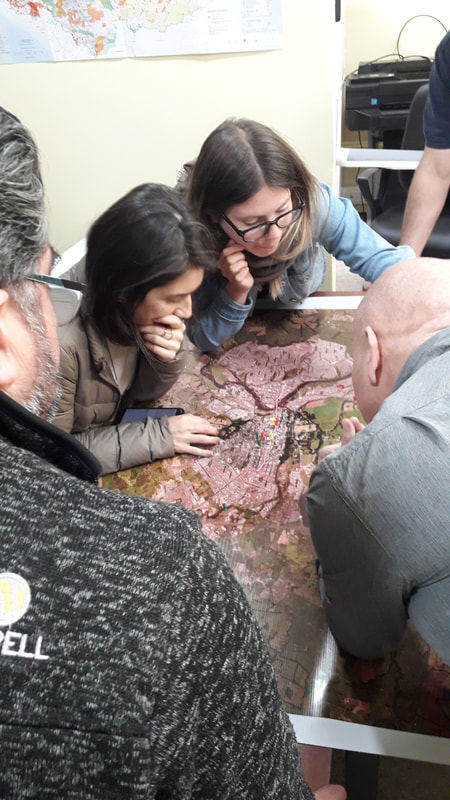 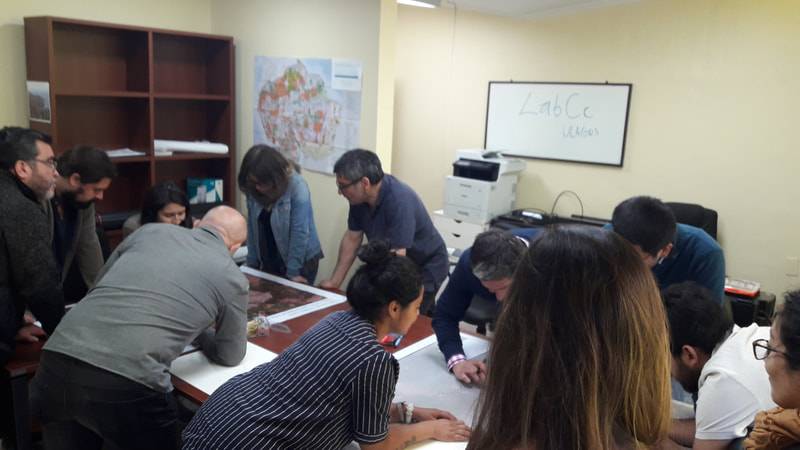 Between September and October of 2019, Allan traveled to South Africa and Mozambique to visit our partner institutions for international collaboration research. On September 22, 2019, Allan met QES-AS alum Ferrial Adam, a PhD student in the Department of Anthropology and Development Studies at the University of Johannesburg whose work explores the way in which poor communities in South Africa, located near polluting industries, are using science to obtain evidence of water pollution.

Ferrial and Allan are currently co-authoring an article about citizen science, with a particular focus on their respective research placements. 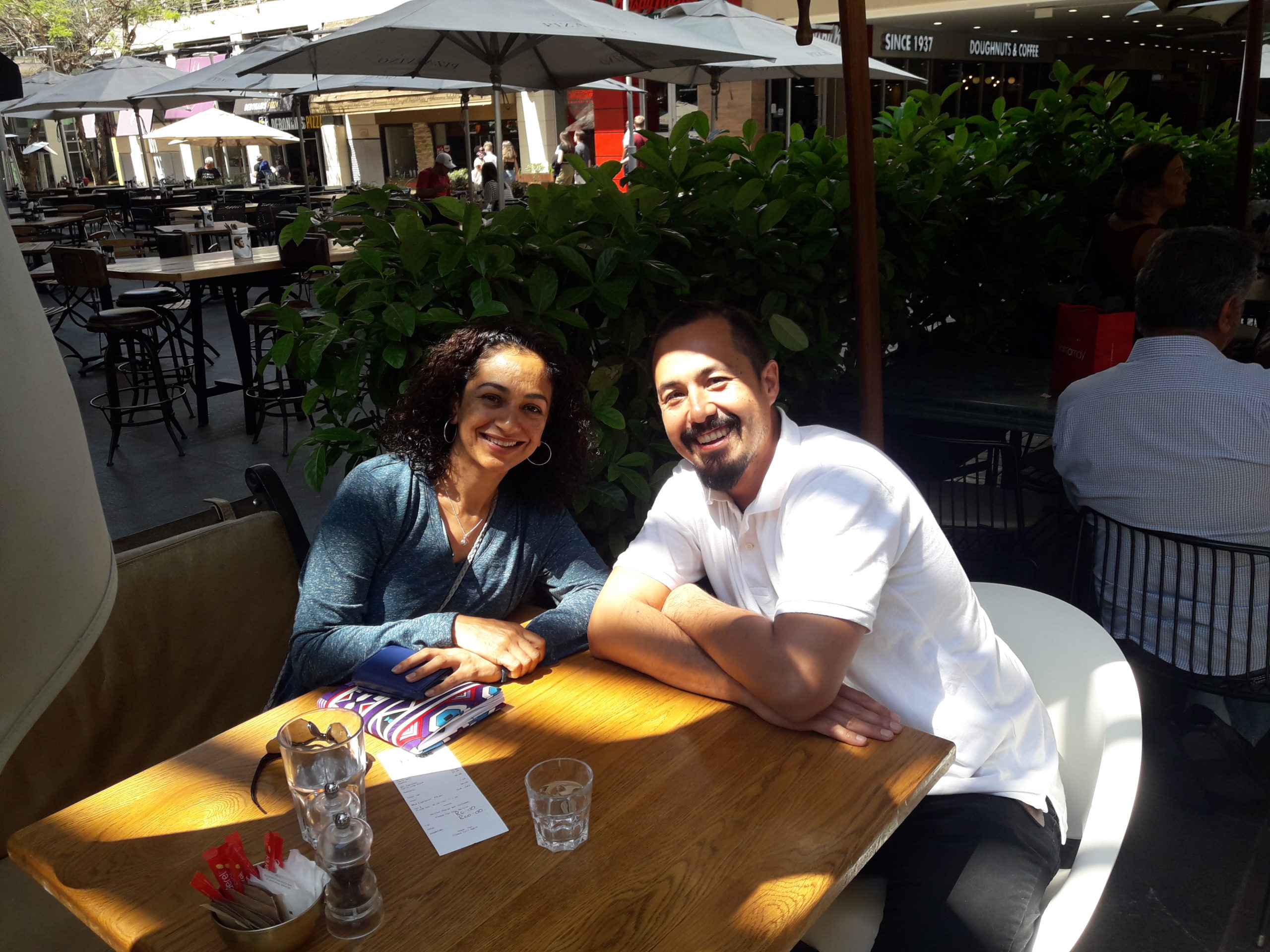 Ferrial and Allan meet at the University Johannesburg

On October 2, 2019, at the invitation of Dr. Giverage Amaral from the Technical University of Maputo (UDM), Allan met with local scholars and academics in the fields of sociology, disasters, economics, and gender, to discuss his project, learn about climate change in Mozambique, and to identify opportunities for future collaboration. 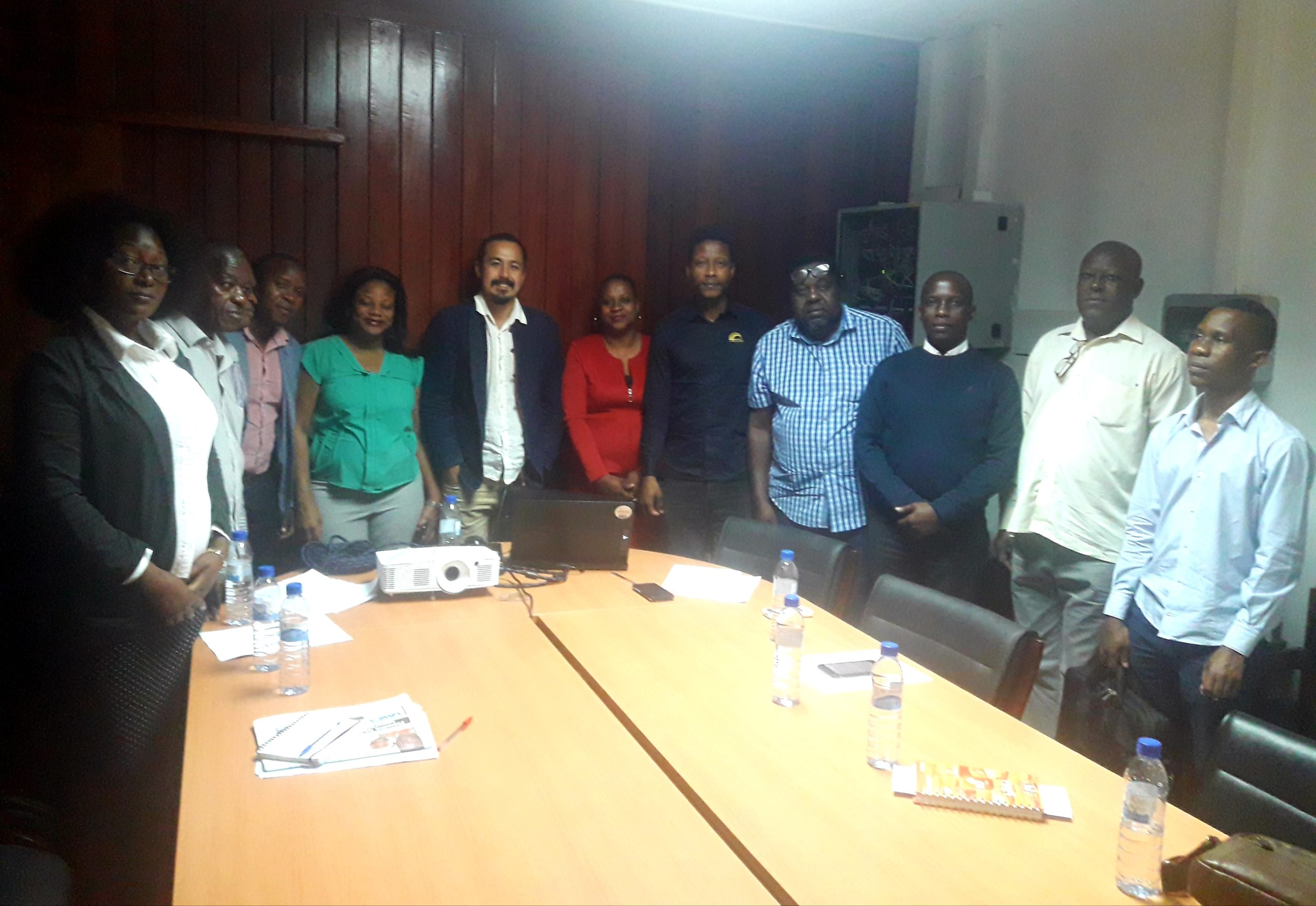 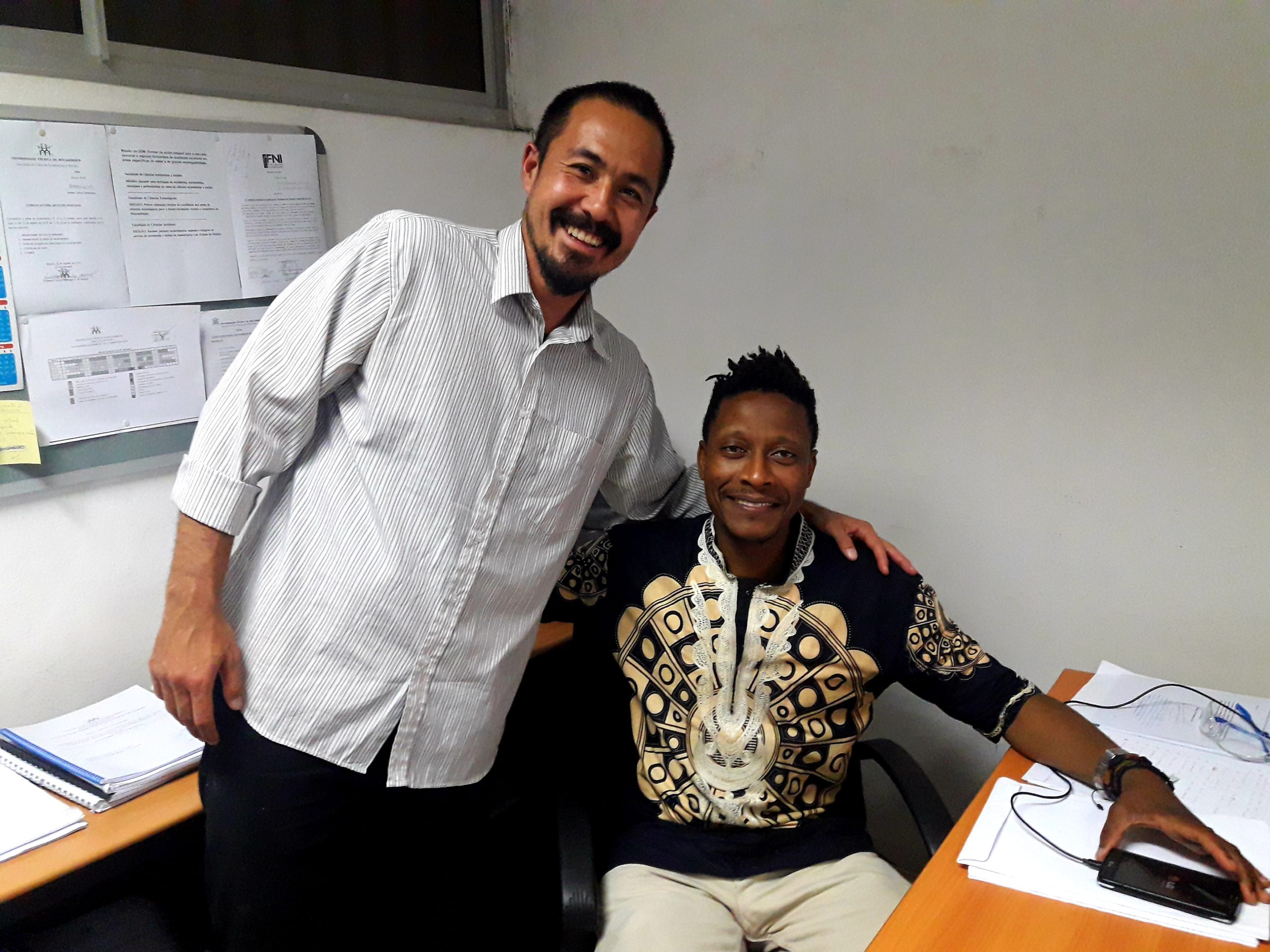 Also on October 2, Allan presented his research at a post-graduate student Seminar -- at the invitation of Dr. Nicia Giva from the Faculty of Agronomy and Forest Engineering -- at Eduardo Mondlane University. 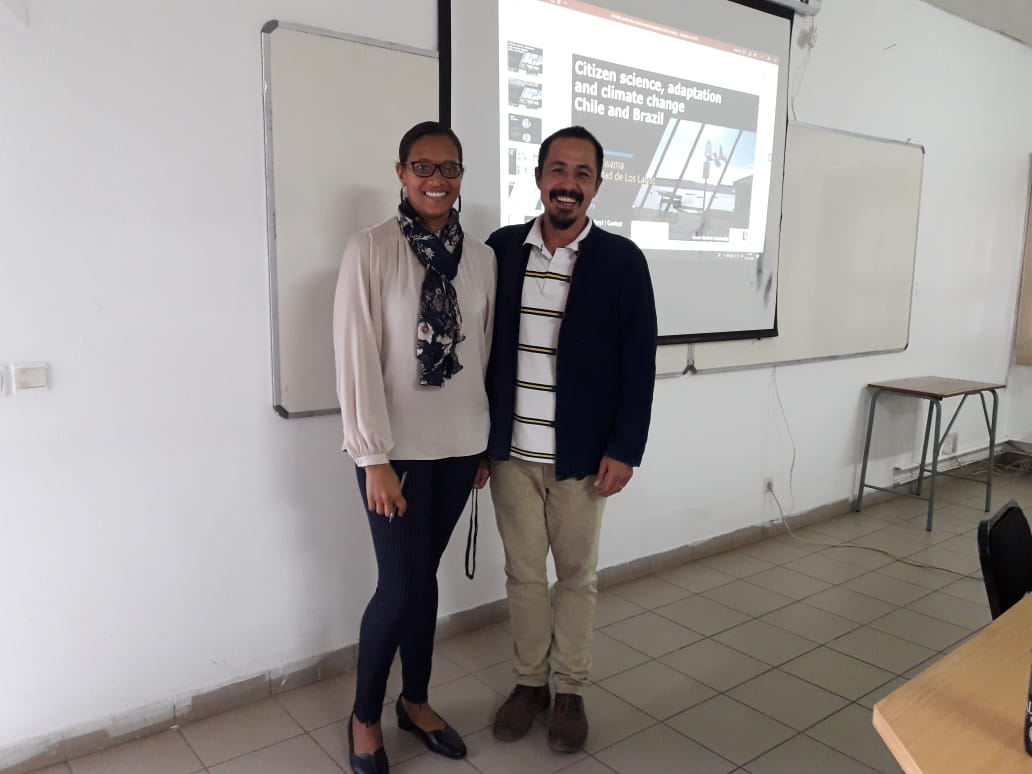 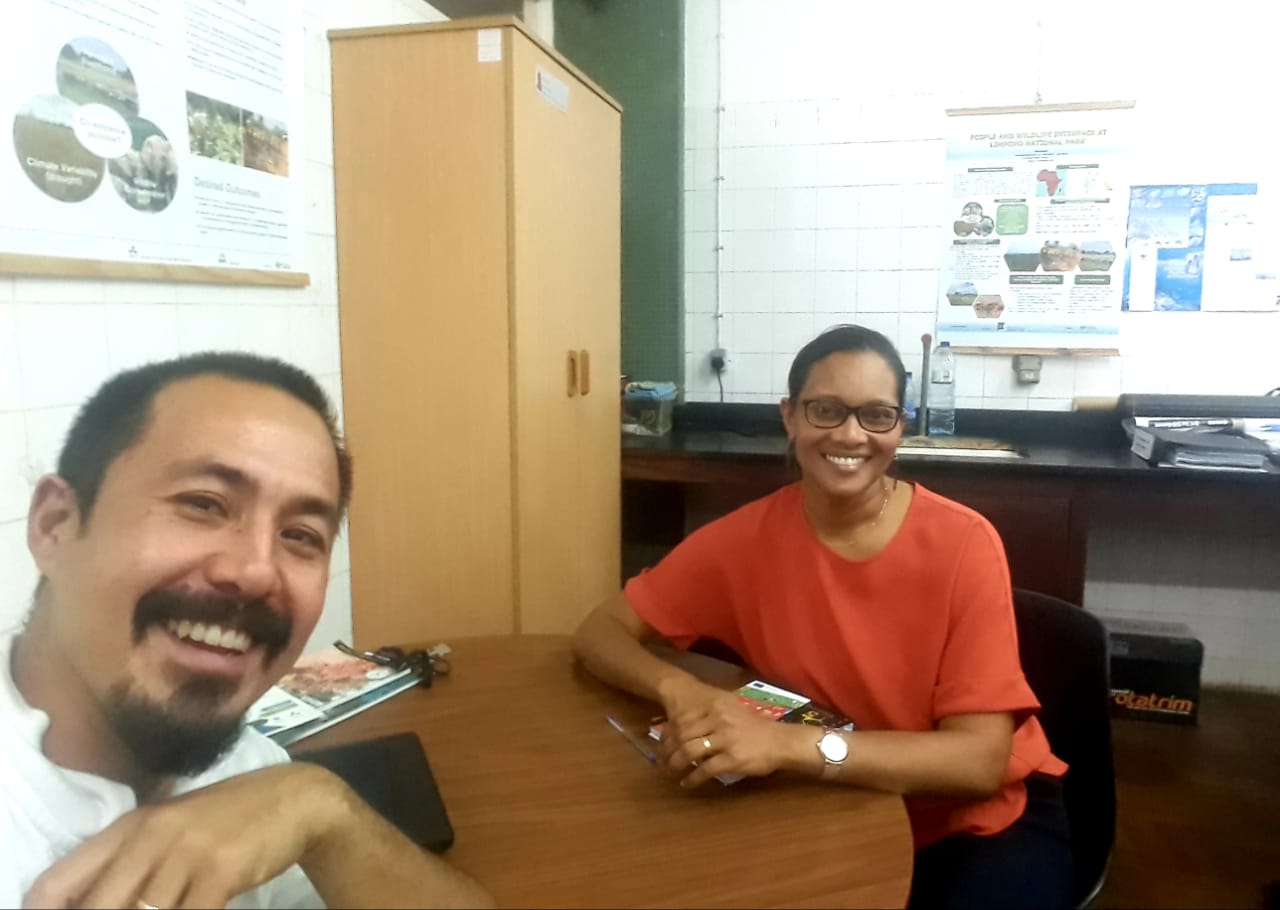 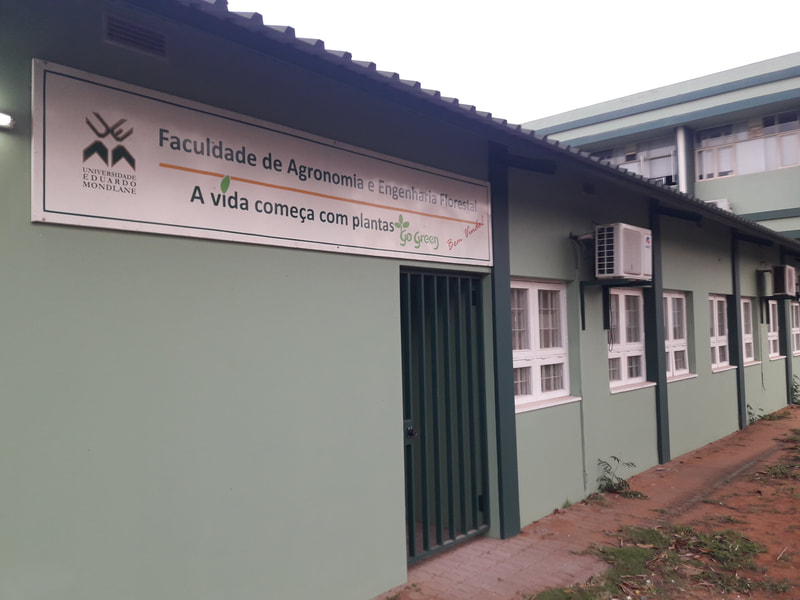 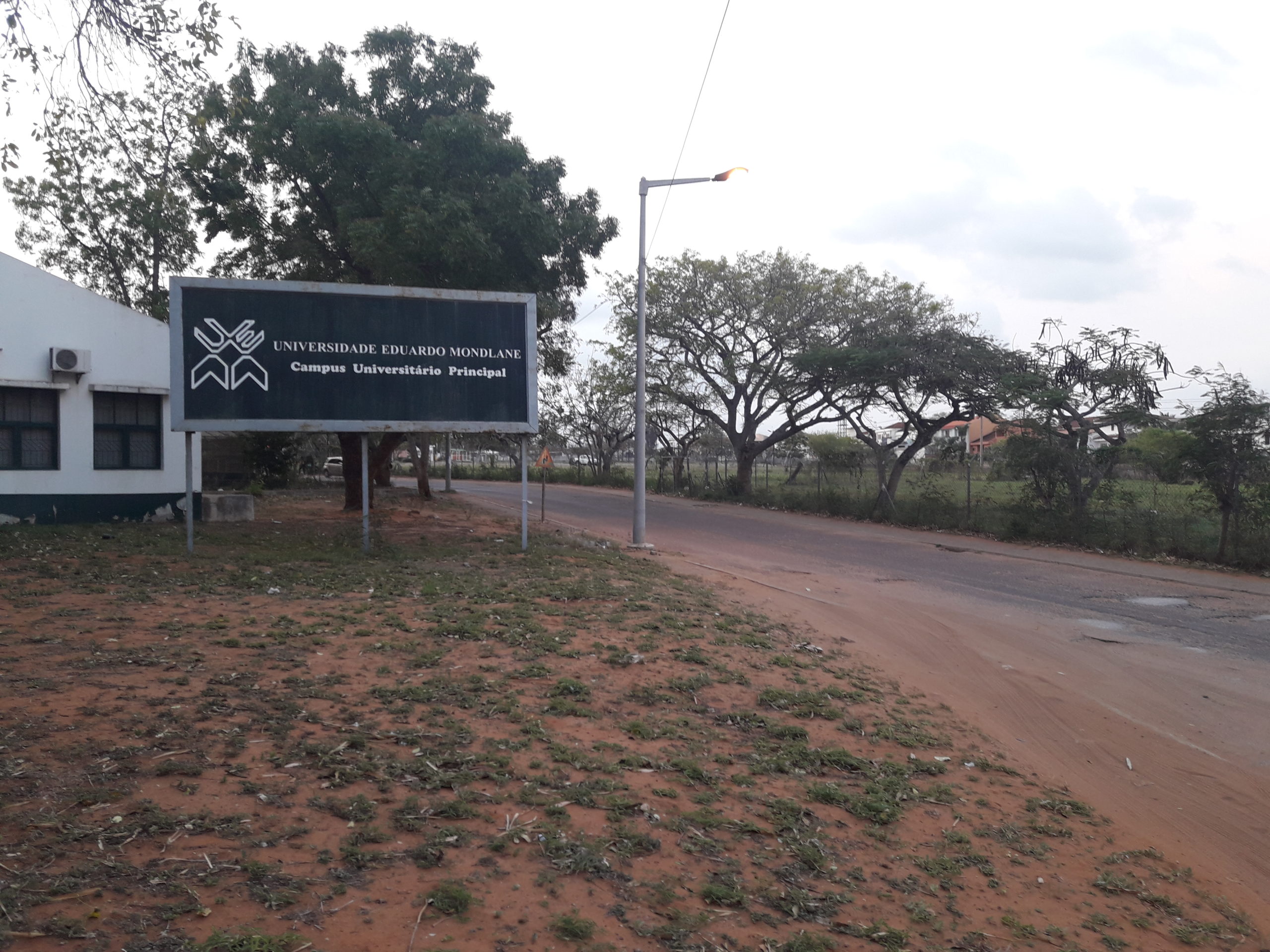 Allan's trip to Africa gave him a unique opportunity to network with QES-AS alum, Ferrial Adam, as well as other African scholars, who are currently working on their QES-AS applications. In addition, Allan connected with several African academics conducting research in areas related to his project and discussed opportunities for future collaborative opportunities.