The main goal of this research project is to articulate local indigenous knowledge and scientific knowledge about rivers to strengthen the resilience of the river as a social-ecosystem. The specific objective of this project is to implement strategies for the co-production of knowledge to better understand the functioning of the Queuco River, an Andean tributary of the Biobío River (Figure 1). This objective will be carried out through ethnographic work, strengthening of an on-going community monitoring of the river, and through participatory mapping with the six Pewenche communities living in the basin. 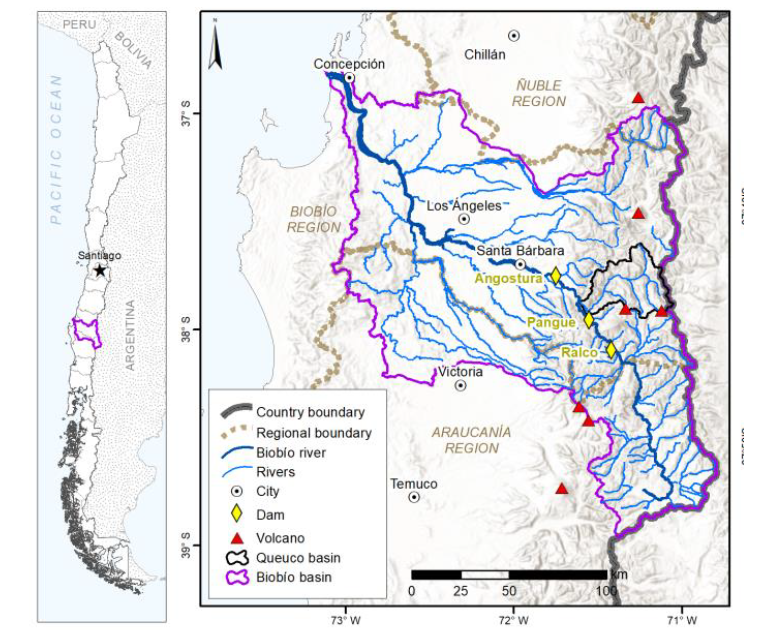 Figure 1: Location of the Queuco basin within the Biobío basin

The Biobío River is located in the biogeographic transition between central and southern Chile, it forms part of the Valdivian Temperate Rainforest hotspot and holds the highest diversity of native fish species, including two endemic species, all of which are under extinction threat. The Biobío life-support systems also generate a great diversity of ecosystem services. Among these, the Biobío stands out for its enormous hydroelectric potential, which is estimated at around 2.902 MW. This potential began being studied in the ’60s and since then, three mega-dams have been built: Pangue (1996), Ralco (2004), and Angostura (2014).

There is currently another dam under construction (Rucalhue) and a fourth one under evaluation (Huequecura). These projects reflect a national policy to promote hydropower as clean energy, however, they have not had proper environmental impact evaluation. For example, the synergic impact on ecosystems has not been adequately accounted for and through the evaluation process, the State has blatantly disregarded Pewenche communities and their livelihoods, incorporating forms of participation based on misinformation and division of the communities for the company’s benefit, deepening the environmental injustice. Aquatic communities have also been hurt by the construction of these projects, some populations even being extirpated from reaches limited upstream and downstream by dams.

The decision to pick the Queuco River as a case study came from a specific request to carry out research in this site came from Red por la Defensa del Río Queuco (RDRQ), a local activist network initially organized to articulate a resistance movement against a development project called Carretera Hídrica. This project aims to build a “hydric highway”, starting water extraction in the Queuco River, to transport massive volumes of water from rivers in central-southern Chile to basins in the north. Increasing water scarcity is a reality at a national level, responding both to climate change and to the market-based water allocation model in Chile. The company behind Carretera Hídrica misinforms about the impacts of the project, even claiming that the project would help mitigate the effects of climate change, under the slogan that water in the south is abundant and “lost in the sea.” This argument is a fallacy that has been pointed by scientists from diverse disciplines and evidenced by previous similar water transfer projects in other countries [19]. The Queuco River basin itself is in an area where decreasing precipitation is projected, along with increasing temperature. The rising of the 0 ºC – isotherm, is leading to lower snowpack accumulation and thus decreasing water availability in the summer.

Camila's thesis progress so far has also pointed to hidden threats that were unknown to the local communities until now. Particularly, the fact that an alarming 99.98% of water rights in the basin are currently owned by people and companies outside of the basin. Many of these rights are registered for hydropower generation, so even if there are no projects developed or proposed yet, this constitutes a latent threat. Most surprisingly, these water rights have been allocated without any official river gauging station in the basin, only through hydrological modeling based on nearby stations and no climatic projections on future water availability.

In this context, learning about the Queuco River and its healthy functioning is paramount. It is a unique site in an epoch of environmental urgency and deep social change. It also poses an invaluable opportunity to collaborate with local organizations and members of Pewenche communities to co-produce knowledge and challenge traditional power-dynamics resulting from unequal access to information. Finally, it represents an explicit opening to dialogue between scientific disciplines and other knowledge systems.

The project has evolved to adapt to current COVID-19 travel restrictions and also evolved in response to local demands. Due to travel restrictions in springtime 2020, it wasn’t possible to install, as initially planned, a river gauge in the Queuco River which would allow to register a continuous river level time series and complement with direct discharge measurements to model the year-round river regime. The members of the RDRQ insisted that they wanted to contribute somehow to the river monitoring and to avoid “losing” a year of potential data. Their request for training in basic hydrology and river level monitoring led Camila to seek out possibilities to do so and find a citizen science smart-phone application called CrowdWater that was developed at the University of Zurich, Switzerland. Together with the RDRQ, Camila coordinated a training workshop centered around hydrology and participatory science concepts in May 2020. To the initial three monitoring sites Camila had proposed, a fourth one was added upon their request to monitor hydropeaking operation in the Biobío river downstream of the Pangue dam. Since May, they have diligently captured observations at these sites almost on a daily basis, even receiving recognition directly from the CrowdWater team.

Figure 2: Photographs from the training workshop in May 2020. (A) The theoretical part on fundamental hydrological concepts. (B) & (C) Participants in the field learning with the app. (D) Example in Queuco River of the digital stage from CrowdWater app. (E) The time series of the past seven months of nearly-daily observations and the most complete site in the Queuco river. Photo credits: (A) Cecilia Marín (B) & (C) Paulo Urrutia, (D) Camila Bañales-Seguel, (E) CrowdWater App screenshot.

This research project seeks to strengthen this monitoring with two strategies. First, by extending the participation to more members of local communities through an official open call for new participants. This will involve coordinating new training workshops to teach how to use the application and discuss questions or new proposals that participants might pose regarding the river. These might involve adding new monitoring sites or monitoring aspects (e.g. plastic pollution on the river course, observation of ephemeral river courses). The second strategy is to improve the precision of measurements. CrowdWater river level observations work based on a “digital stage” placed in the first observation (photograph) made – all the subsequent observations are compared to the initial observation. However, another option the app offers is to make observations based on a physical stage, which allows more precise measurements. This strategy will involve the acquisition of necessary equipment and the installation of the stage in the site selected. Another piece of equipment that has been proposed is the acquisition of a camera trap to improve the monitoring of the site that captures the daily fluctuations of hydropeaking dam operations.

The data obtained from this monitoring will be systematized to develop a time-series of year-round measurements of the river fluctuations. If COVID-19 travel restrictions allow, the project goal to install a digital river gauge is still in line. If this were possible, the time series obtained throughout 2020 using CrowdWater observations will be contrasted with the digital river gauging data (gathered throughout 2021). This constitutes an unprecedented effort in Chile to validate river-level data obtained through participatory science and hopefully will open the way for the implementation of community monitoring in other rivers.

The second aspect of this project is the implementation of participatory mapping workshops with the Pewenche communities in the Queuco basin. The information expected to be gathered from these workshops is related to diverse aspects of the relationship between local inhabitants with the rivers and water bodies in their territory. We hope to identify local toponyms of rivers and water bodies and learn through storytelling or narratives (piam) and tales (epew) about the local knowledge related to these sites. Local toponyms in the Mapuche world constitute a form of knowledge of the spatio-temporal understanding of the territory and the practices and meanings associated with it [48]. Part of the materials which will be available in the workshop are detailed maps, which will be at the disposal of participants to identify key sites that might inform practices and norms related to common water resources and their diverse uses (e.g. drinking water sources, livestock drinking water, irrigation, cultural uses, fishing sites). Participants will be asked about interventions (local or foreign) in the rivers, the location of social-ecological conflicts, and the awareness of formal visits to identify sources of water rights allocations. This last point has already come up in previous field visits, as it is a legal requirement of the National Water Directorate (Dirección General de Aguas, DGA) to visit the sources from which water will be extracted and this doesn’t always happen, or it happens through misinformation of local inhabitants. A final aspect of these workshops will be assisted by photographs of different river types (e.g. confined, unconfined braided, sinuous, etc.) and eco-geomorphologically relevant landmarks (e.g. waterfalls, lakes, mountain wetlands, thermal sources, irrigation channels). Local inhabitants generally know their land better than outsiders, and this information will be valuable to nourish river geomorphological classifications which have been advanced as part of the thesis. Learning from their perception, identification, and valuation of geomorphological attributes throughout the basin will also contribute to developing strategies for future participation in geomorphological river classifications based on local knowledge. 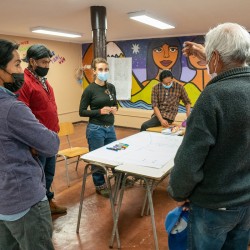 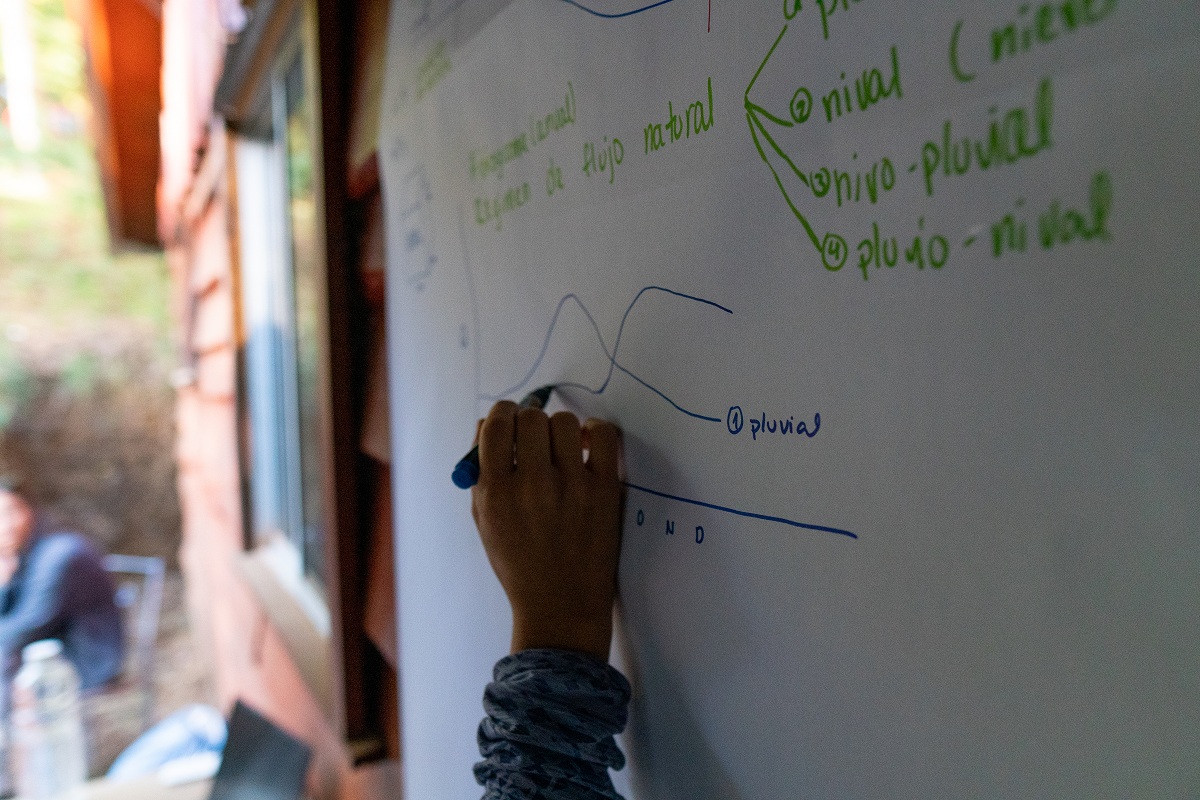 Through the support of her Doctorate program, Camila has incorporated adaptive methodologies to the pandemic context (Photo: Álvaro González). 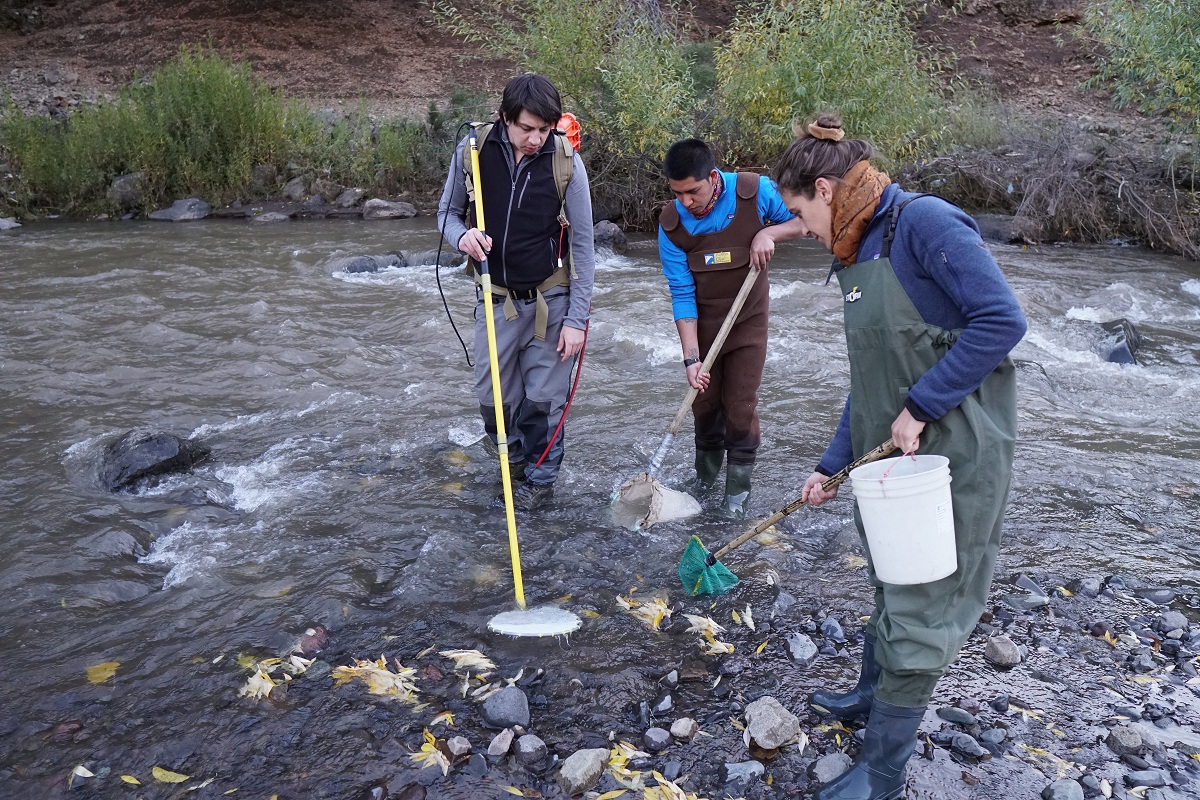 The South Node of the Citizen Science Network is a group of people and institutions linked to open science (Photo: Álvaro González). 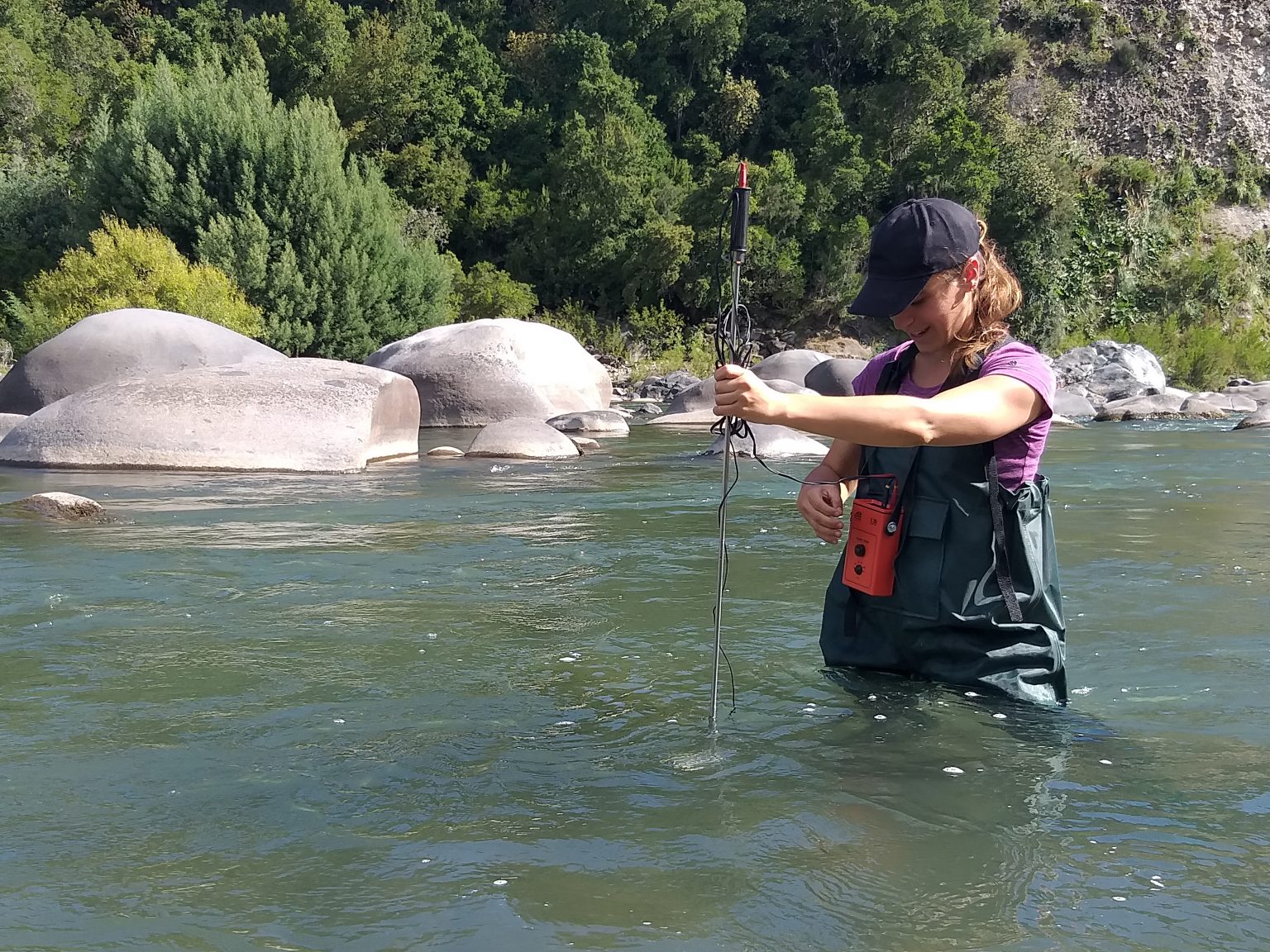 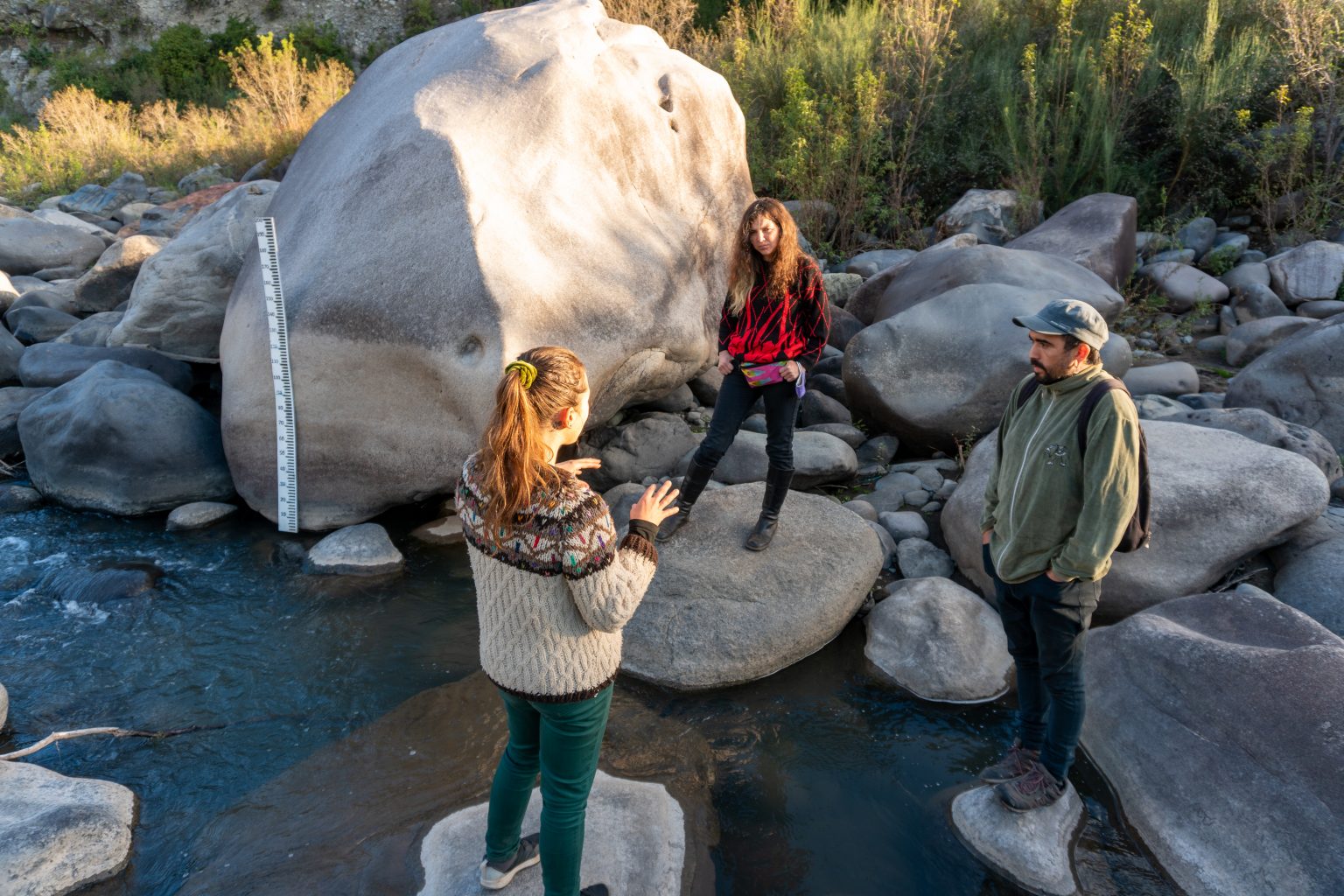 Training workshop to teach about the community monitoring program and use of CrowdWater application (Photo: Álvaro González).